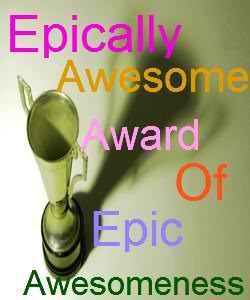 I am awesome!  Not merely awesome, but epically awesome….or is it awesomely epic??  I don’t know.  I went to sit down at the computer to write this post, and I was already here, so I don’t know whether I’m coming or going.  That’s unusual.  Most times there’s more than enough people to tell me where to go,  when to leave, and what to do when I get there.

I know that I am awesome/epic, because my good blog-buddy, Ted, at sightsnbytes  delivered yet another big helping of blog award, but only because I deserve it.  The attractive, parti-colored picture of the Epically Awesome Award Of Epic Awesomeness at the top, is the reason for the title of this post.  (Tell ‘em what you’re going to do, then do it, then tell ‘em what you did.)

There are three rules; aren’t there always?  Since I’m a rugged individualist (pronounced shit-disturber), rules and I don’t always get along well.  I’ll tell you what they are, before I brush them off the WordPress.  If you receive this award, you’re supposed to pass it on to ten other worthy bloggers.  You are expected to notify them that you have done so, and then publish a post including ten, hopefully interesting things about yourself.  There isn’t even a rule that you must display the award, but I’m so awesome, I did it without being told.

These awards quickly become logarithmic.  One becomes ten, which become a hundred, which become a thousand.  Soon, it’s like the Big Bang all over again.  There’s muons, and pions, and Higgs bosons floating everywhere, and who knows what other God Participles?  I’m going to apply the Dark Matter gravity of stubborninity, and cause this to coalesce into an amusing, yet informative post.

SnB and I tend to travel in much the same blog-circles, although he orbits clockwise, while I rotate retrograde.  He has already passed this accolade on to many of the same bloggers I would have honored.  I’ll skip laziness, and claim that efficiency prevents me duplicating his efforts.  Since I haven’t had anyone charged with blogging with the intent to be awesome, I need not notify anyone.  Time saved is Miller Time.

Lastly, I’m supposed to tell you ten things about me.  Benzeknees has been asking for information about Archon, but I think it’s just so that she can do my obituary.  I’ve met a guy who can paint the Ten Commandments on a grain of rice.  If he did my entire interesting history, he’d still have room for about eight of them.  When I works, I works hard!  When I plays, I plays strong, and when I thinks, I falls asleep.  I don’t think I can get ten new facts about me, but I’ll think about it.  ZZZzzz.  Huh!  Wha’?  If the list below isn’t enough to slake your nosiness curiosity about me, try here, or here.

I need to check with SnB about which European music he likes.  I like some of the less mainstream British Rock (?).  The Beatles were creative.  The Rolling Stones had a bit more of an edge, but I went for Electric Light Orchestra, The Moody Blues, and Jethro Tull, who have presented so many musical sides, a dodecahedron would be jealous.

I like to use big words.  Well….I don’t like to, but I’ve got them in my vocabulary.  I don’t use them to make me look impressive, but in the hope that some of you will be inspired to research and use a few.  Logarithmic, parti-colored, dodecahedron, retrograde, there’s gonna be some learnin’ here before you guys go home.

Born in a town with a Great Lake in front of me, a river beside, and thin ice on the pond down the street, I was still 14 by the time I learned to swim.  I still don’t do it very well, or the “proper way”, but I can travel a fair distance and stay afloat a long time.  I spent huge amounts of each summer in the water, but it wasn’t till my swimming friends wanted me to join them at the harbor, where I couldn’t touch bottom, that I finally learned to swim.

I liked to jump off things, and would have done more if I could have afforded it.  I found out about the new sport of sky-diving at about 17.  My son says he won’t step out of a perfectly good plane, unless it’s at the terminal.  Me, on the other hand….It costs how much?  After swimming in the harbor, soon I was diving off the fishing boats.  The aft coamings were 12 feet above the water, the cabin roof, 14.  One summer, we had a drill-rig on a barge parked at the dock for about three weeks.  The tip of the tower was about 20 feet up.  I never jumped feet-first, but I would dive headfirst from up there.  Perhaps that explains some of my current confusion.

A big thank-you to SnB, for including me on his list of worthy blogs.  This award gives me another chance at a little light-hearted prose, and a valid excuse to air out (some of) my psychoses in public.  I’d also like to thank my neighbor for not pressing charges, and the nice policemen for being so understanding about that little restraining order violation.  It’s hard to get internet access in the holding cell.