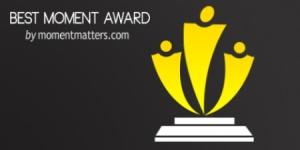 Benzeknees has been busy successfully completing the A To Z In April challenge.  During that time, she’s accumulated four different blog awards.  Now that she’s done, it’s time to inflict pass these on to other deserving bloggers.  Benze is a very intelligent writer.  Well, she’d have to be.  She lives in the Edmonton, Alberta section of the Great White North.

All the residents of Edmonton are so smart that they pushed up a big pile of mountains between them and the dope-smoking, tree-hugging, granola-crunching, Birkenstock sandal-wearing residents of the Canadian left-coast, to keep them from leaking back east.

Not knowing what else to do with these awards, she kindly offered me one copy of each of them….at a reduced rate.  The first one she dumped on me graciously passed on, was the Best Moment Award, seen above.  The rules are that the rules must be reposted with your acceptance speech, which can be written or video recorded.  Winners have the privilege of naming the next group of awardees.  The repost should include a new set of awardees and the current winner should inform them of the good news.

The good news is that I don’t know any bloggers who give good acceptance speeches, so I’m not tossing this one into the manure spreader.  I know a great burrito and re-fried beans maker, a spinner, and a couple of IT techs, but no great speechmakers.  If you want a copy of this award, you’re going to have to pull it from my cold dead….no, wait a minute, that’s the NRA.  I met a couple of them in Detroit at the gun show.  I told one guy I didn’t want to join, and he pulled a gun on me.  I explained that I was Canadian.  He apologised and gave me a picture of his wife, wearing nothing but a Mossberg shotgun.

This award seems to be given for making a great acceptance speech for being given this award.  That seems to be circular logic to me, but then, I’m often seen wandering around in circles, speechifying and orating and gesticulating, and other stuff that could get me arrested if anybody reported it.

I am pleased though, that Benze thinks enough of my writing ability to forward this opportunity to have a little fun at my own expense.

To make a great acceptance speech I am to show gratitude and thank those who have helped me reach this point.  I have effusively thanked Benze. (Not effusive enough??!  I’ll get out the leaf-blower.)  I’ll be busy with that for a minute, the rest of you guys each just take one out of petty cash.

I should use humor to keep you entertained and smiling.  I see most of you smiling.  At me, or with me, I’m not sure.  Dying is easy.  Humor is tough!

Inspiration!  I should make my story touch your lives.  Generally, I’m the only one people refer to as touched.  Even if I only serve as a negative example.  This is a tough job, which should only be performed by trained professionals.  Kids, do not attempt this at home.

The last rule is that I’m supposed to display the award badge on my blog/website.  Being the magpie, interested in shiny things, that I am, I’ve already taken care of that.  I guess all that’s left for me is to shut up and go away, and I certainly know how to shut up.  This is me, shutting up.  One time I shut up so much, I almost starved to death….wouldn’t tell my parents I was hungry….could somebody open the door please?