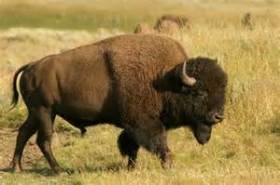 Okay, I wrote the above, and the computer didn’t explode, so, on with the post.

With five hours of sleep, and adrenalin coursing through my veins, I was awake to greet the son as he got home from work at 7:15 AM. By 8 o’clock, I had much of our supplies loaded in the car, when the alarm woke the wife.

With this head start, and only a little chivvying on my part, the wife was beautiful enough to leave by ten to 10, instead of my feared ten after.  We took along little snippy Miss GPS, who the wife has named Ethel.  We had three choices to cross the Niagara River, to get to Buffalo.  I had decided on the furthest south, at Fort Erie, even though it meant turning back north on the American side.

We called Cordelia’s Mom, and told her we were about to cross over. She said she would pick up her mother-in-law, and meet us at the restaurant.  It was just past noon.  We crossed the Peace Bridge, and Miss GPS ordered that I “turn left on David Street”, only, I couldn’t see David St.  The impatient guy behind me honked, and the wife insisted that we proceed, even if it was in the wrong direction.  It was!  RECALCULATING!

We went down to the next exit and reversed direction. Now, Ethel was happy.  She quickly got us to the restaurant.  We had just parked when a silver sport-ute came careening in off the street at high speed, on two wheels, one woman driving, and an older lady passenger desperately clinging to the door handle.

Sure enough, it was CM, who came breezing out of her vehicle like a little whirlwind of happy, helpful good humor.  I don’t know where such a small person packs all that personality.  She soon led us astray into a lovely Greek eatery. 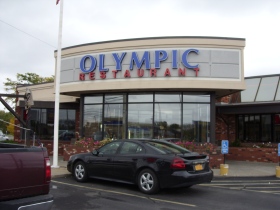 Since the lunch crowd soon emptied out, the staff was happy (enough) to ignore us, while we had an almost two-hour meet and greet. The time just flew by.  She comprises such an enthralling Presence, that it compounded and concentrated my senility.  I’m sure that I forgot at least half of the things I wanted to say, and ask.

Hoping to get some Nestle Italian Sweet Crème Coffee Mate, which is not available in Ontario, I had asked CM to keep an eye out for it as she did her own shopping, to tell me where to go to buy it.

Then I compounded my sins, by asking her to look for the Goya hot sauce that Madame Weebles had been so kind to send. While not yet totally consumed, it won’t last forever.  We can’t find it in the Detroit area but, since it’s bottled just outside NYC, I thought it might be stocked in Buffalo.  It was, YAY!

Then I had the effrontery to ask CM if she would purchase these items, to save me the running around, and I would repay her.  The nerve of some people’s kids!  She did – at two different stores.  It’s not my good looks; it must have been my glib tongue keyboard.

She carried a stuffed Teddy bear, and we had a stuffed Lamb, as identification. She showed us a good time, but nobody took any clothes off.  With what she claims is ‘Buffalo’ hospitality, first she treated us to a lovely lunch.  I got suspicious when she hauled out a gift bag. 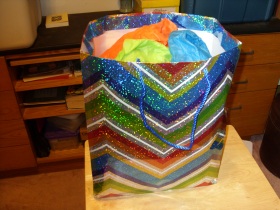 In it were the Coffee Mate and the Ancho Sauce, but she had also added a box of ‘Buffalo’ sponge candy, and a bottle of Buffalo Wing sauce. When I asked her “How much do I owe you?”, she insisted that these were all presents. 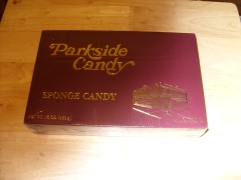 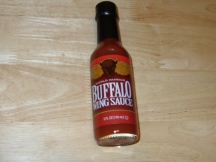 She asked where we were staying, and I told her at a Red Roof Inn, but way out by the airport. She refused to let me rely on Ethel GPS, and insisted that she would lead me, fifteen miles, and most of an hour, there and back, out of her way, across town – if I could keep up.  With her responsible for where I was going, I had a chance to look around and discover where I was.  That will be important, later.

She led me right to our motel, with a quick, unintended stop at the Bob Evans out front, and did everything except book me in. We gabbed for a few more minutes, and I effusively thanked her for her many kindnesses and generosity.  The wife says that she confided that she was somewhat relieved that I had brought her along, instead of son Shimoniac, The Bear.

I shook her tiny hand and, with tears in my eyes, sadly waved goodbye, as she drove away. Still all misty, I turned back to look at my car – and THE LOLLIPOPS, which are the very center of this tale, still in the back seat.  She had told her mother-in-law about the candy, and a couple of blocks away, MIL asked, “But where are the Lollipops??”

What will she do about them?? What will Archon do about them??  Will we return to Ontario –eventually – and mail them to her?  Will I just say to Hell with the diet (again), and eat them?  Tune in next week to find out.

My only complaint is that she says she does not find me as grumpy in person as I seem on my blog site. I don’t know how that can possibly be.  I see that she has started referring to me, the World’s Champion Grumpy Old Dude as G.O.D. – not to be confused with God.  I have more power, authority, and ill temper.

I have a poll for my readers.  There are several more of these episodes.  Would you prefer to be bored all at once, sequentially, or would you rather have me insert the occasional rant?

19 thoughts on “The Fellowship Of The Blog – Episode Three”