I read about 250 books in the above series over the years. It started with a Special Forces soldier coming home from Viet Nam to avenge his family, murdered by ‘The Mob.’  Seeing the limitations of this story arc, after about 30 books, the hero ‘died’ and was reborn as an independent Government agent, fighting terrorists, although this was back in the ‘80s.  They weren’t called that, then.

In one book, the hero pursued an agent who was bombing American Federal Government buildings and installations, all the way to Detroit. He then crossed the Ambassador Bridge into Canada, just in time to see a bomb blow up a blue, street mailbox.

I’m still not sure what value the author felt blowing up a Canadian mailbox had – a few pizza shop flyers destroyed and somebody’s unemployment cheque (check, for Americans) lost.  What caught my attention was the fact that the (American) author had described the Canadian mailbox as blue.  American mailboxes are blue, Canadian mailboxes have always been British Red. 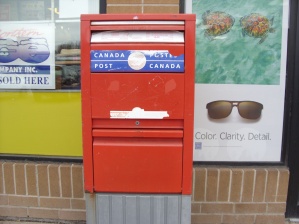 Graffiti taggers’ ill manners and lack of respect for the property of others started leaking north across the American border, like the Emerald Ash Borer, and deer ticks with Lyme disease. The more OCD at Canada Post began to be concerned about the look of their mailboxes. 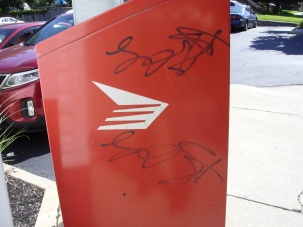 They began a program of refinishing them with a glass crystal surface like that applied to subway cars in the movie Turk 182. It’s so smooth that, if the paint doesn’t fall off on its own, it can be wiped off with a dry cloth.  The only problem is, taggers just hate an empty surface, and will keep tagging, no matter how many times it’s cleaned.

Canada Post solved that problem by adding random, jumbled Postal Codes, so that the boxes look like they’ve already been pre-graffitied – so neat – so clean – so much better. Right…. 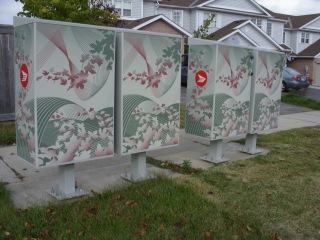 Apparently they were not eagerly accepted, so Canada Post has come up with something a little more artistic.

I recently pulled into the subdivision, and there was a van parked, and a man in a work uniform in front of the neighborhood cable TV junction box. I thought someone might be upgrading to the new fiber-optic service.  As I drove past, I saw that the worker had a small paint tray and roller.  The name on the van was ‘Graffiti Grabbers.’  He was painting over the taggers’ marks.

When I got home, a quick research revealed that graffiti ‘artists’ created enough vandalism to keep the above, and two more cover-up companies busy. I guess we can’t all be bloggers and only sully each others’ cell phones, tablets, and computer screens.