I just want to make it perfectly clear. I may – or I may not – participate in and/or successfully complete the 2016 Reading Challenge, shown below.  Since reading is always good for you, I suggest you consider trying it.  Next year, I may or may not tell you how I did.  For now, I’ll tell you how it would have turned out, applied to 2015. 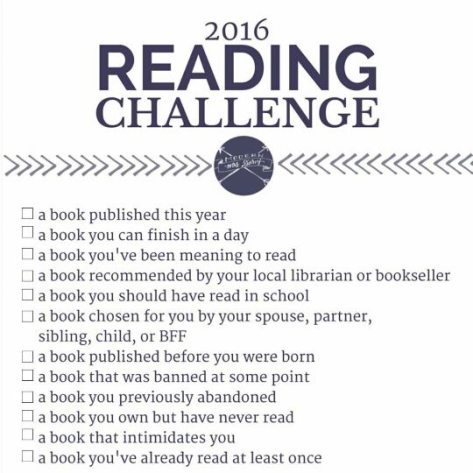 A book published this year

Since the year is still very young, I’ll list ‘The Fold’, an alternate dimension Sci-Fi by Peter Clines. It was released late in July/15.  I received it from the Library on January 3/16, and returned it on January 7/16 because there was another person with a reservation against it, waiting to read.

A book you can finish in one day

‘Refuting Evolution’ was only 132 pages. I could have finished it in a day, but since I often read three books at a time, I didn’t.  As a tween, pre-television, I once took out two Hardy Boys mystery books from the library at 7:00 PM, and had one of them finished by 9:00.

A book you’ve been meaning to read

At any given time, I have 20+ books ahead of me. I (eventually) mean to read them all.  I read one book by Faye Kellerman, but possess a hard-cover book by her husband Jonathan Kellerman, which I’ve had for almost 15 years.  Maybe I’ll get around to it this year.

A book recommended by your librarian or book seller

Both my regular book-lady at the market, and librarians, see my eclectic choices and know better than to suggest anything. Book-lady just makes me aware if any books from my preferred-authors list have come in.

A book you should have read in school

I read them all in school. I had my 6 yearly book reports in by the end of September.  I read sections of English Lit texts that weren’t even assigned.

A book chosen for you by your spouse, partner, sibling, child or BFF

Nobody chooses for me.  I inherit the occasional book from the son’s overflowing library.  Ted @ SightsNBytes told me about the ‘Repairman Jack’ series.  Jim Wheeler recommended ‘A World Lit Only By Fire’.  BrainRants suggested ‘Guns, Germs And Steel’, which I am currently reading, now that the Library finally notified me that it was ready to pick up.

A book published before you were born

Are you kidding?? I have an autographed, first-edition of The Ten Commandments.  In 2015 I read ‘Malleus Maleficarum’, and ‘Cymbalum Mundi’, both written around 1500.  I own The Collected Stories of Sherlock Holmes, from the 1880s.  In 2014 I borrowed ‘The Bible Unmasked’ from a local university library.  The hardback was dated 1906.  I have 1960s, paperback copies of Ralph Milne Farley’s ‘Radio Planet’, written in 1914, and the original Buck Rogers novel, published as a serial in 1918.

It is possible, though not likely, that another such old book may arise in 2016, but I’m not going out of my way, just to fill an online quota.

A book that was banned at some point

Banned where? Boston?  USA?  Iran?  I read books which hold relevant interest for me.  Lady Chatterley’s Lover and The Satanic Verses just don’t do it.  See ‘Quota’ above.

A book you previously abandoned

Again with the kidding! Any book I choose must hold at least some value.  Even if I find I’ve chosen poorly, I slog through to the end.  The only book I’ve ever abandoned, unfinished, was L. Ron Hubbard’s ‘Dianetics.’  After a month, still not done, I said, Fun’s fun – but this ain’t it.  He didn’t take it seriously, why should I?

A book you own but never read

I hereby solemnly swear to finally read Jonathan Kellerman’s 2001 hardback, ‘Flesh And Blood’ this year – probably around June. Take me to task if it doesn’t show up on next January’s list.

A book that intimidates you

The 1200 page size of ‘Hell’s Gate’ was a bit intimidating, but I stuck with it to the end. Both ‘Malleus Maleficarum’ and ‘Cymbalum Mundi’ were written in Bible-style English.  ‘Mundi’ was also allegorical, and almost indecipherable.  My thanx to the female scholar who added pages of notes to explain.  Manchester’s ‘World’ was dense.  If I can understand them, they don’t intimidate me.  If I feel I won’t understand, I simply don’t read.

It would have to be science fiction. All other books are traded in for newer ones.  With so many ahead of me, I seldom go back.  In 2015, I reread Heinlein’s ‘The Door Into Summer.’  I may pull out a couple more this year.  I’m considering downloading a $2 Kindle version of ‘The Dark Light Years’, by Brian W. Aldiss.  It’s easier than digging into the storage area under the basement stairs.

I’ve got a shitty memory, but I don’t understand those who reread, and re-reread books.  Like the neighbor who boasted that he’d seen ‘Titanic’ 8 times – the boat sinks, everybody drowns, the hero ain’t gonna make it this time.  Didn’t you get it the first time?

Read me! Then go out and read something else – and tell us about it.