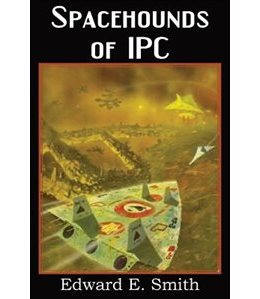 Edward Elmer E.E. (Doc) Smith is arguably the father of the Space Opera genre of science fiction.  His protagonists are the biggest, strongest, fastest, smartest and bravest.  I didn’t use the term ‘heroes’, because he didn’t write them like that.  They might simultaneously be all of the above, but there was always a touch of, “Shucks Ma’am, ‘tweren’t nothin’!”

In one book, the lead captured a rival who had kidnapped his fiancée, and attempted to kill him. At one point, he armed the rival with two .45 caliber automatics; so that they could fight their way through a roomful of someone else’s armed thugs.

Later in the book, the rival warns aggressive underlings not to try anything against him, “Unless you can sneak up behind him with a cannon. He was the one who kicked the door in, and still got off three shots before I fired once.  He was shooting 4 to my 3, and hit every time, where I missed once with my left.”  Even his Japanese valet was described as, “Chain lightning on greased wheels.”

He was a friend and mentor to Robert Heinlein. A line could be drawn from Smith, through Heinlein, up to Gene Rodenberry, who gave us 50 years of Star Trek space opera.

Some of his characters had ‘perception,’ the ability to ‘see’ when eyes couldn’t. Heinlein asked for help in buying a used car.  Doc took the wheel for a test drive.  At one point, he hunkered down and put his ear to the door post, to listen for any suspect vibrations.  He drove several miles without seeing the road, and Heinlein swears he must have had ‘perception.’  He okayed the car, which lasted for years.

The book: Spacehounds Of IPC

This is one of Doc’s earliest sci-fi stories, and the one that he was most proud of. It was originally released in 1932, and then re-released again in 1947.  The paperback version I have is from Ace Books, and sold about 1965.

This is the book where he developed what he would use in later series. All space action takes place within the Solar System.  Gravity on space ships is provided by acceleration or deceleration.  No scientific usage was, or has been, proved impossible.

This is where he first wrote of ray-cannons, deflector shields, tractor and presser rays, guillotine planes, and the absorption of attackers’ weapons output and eventually cosmic radiation into massive capacitors, for re-use. He describes a 10-foot flying lizard-being from Jupiter’s South Pole, which became an interstellar race in his later Lensman series.

Like several other authors, he was terribly prescient about technology. This 1930s book describes hand-held walkie-talkies, electronic calculators, computers and direct-beam radios (albeit with vacuum tubes), and view-screens that he identifies as televisions.

It’s a soft, nostalgic look at science and society of almost a century ago. It’s all black and white – us vs. them – good against evil.  The language is upscale technical, and archaic, even for a coot as old as me.  Nothing is OK (or okay); everything is ‘all-x.’

Even among fellow-scientists, relations are somewhat formal, and a young, unmarried couple, stranded alone on Ganymede for six months (but with no guarantee of ever being picked up) managed to keep their hands off each other. Not at all like Captain Kirk, who couldn’t keep it in the Galaxy, much less his pants.

Not as a suggestion, but merely as a question from Jim Wheeler about whether I ever re-read books, I have dug out and am reading stories I first read 40 and 50 years ago. The passage of time has not only changed Society, but matured my outlook and opinions about many things.  Some of them have been quite….interesting.