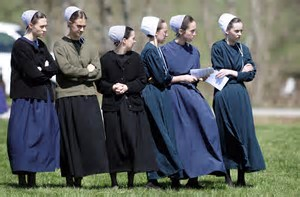 A recent entertainment article in the newspaper described an upcoming series on CBC-TV, titled ‘Pure’, where some Mexican Mennonites, travelling through the US and into Canada, smuggled drugs. The usual suspects were horrified – aghast, and complained. I replied, with information taken from A World Lit Only By Fire!

In his Jan. 25th letter, Social Injustice, Harold Robertson tries to defend Mennonites from an accusation of drug smuggling, in the upcoming CBC-TV show Pure.

He naively asked, ”What next, a brothel full of nuns?” In Martin Luther’s time, that was only one of the sins of the Church and its leaders that he nailed to the door. While still called convents, there were many brothels full of nuns. They funnelled an immense amount of wealth to the Church.

There were also lots of brothels without nuns. The Vatican alone supported three, nearby. People with the surname Pope had ancestors who were illegitimate Papal offspring.

Despite what we like to believe, there are many times when not all religious figures are Holy and Pure.

In another paper the same week, there were two articles, one in Lifestyle, and one in the Religion section, both bemoaning the fact that attendance at almost all Christian Churches continues to decline. The only exceptions seem to be the Fundamentalist, Westboro Baptist-type churches, where they preach Hell-Fire and Brimstone, Biblical Literalism.

Some of the Protestant leaders got together and discussed the advisability of trying to attract more followers, by ‘giving the people what they want’, and abandoning the open, loving, acceptant type of Christianity.

I see at least two things wrong with this approach. First, there is hopefully, only a small percentage of intolerant, redneck-type church-goers who want this inflammatory rhetoric, to buttress their bigotry.  The pie is only so big.  Few new ‘believers’ would be created.  The slices would just get smaller, and it would drive away the few moderates still attending.

Secondly, if you truly believed in logic and science, and a loving, caring God, and populace, but are willing to so radically change your stance, you are doing so for hypocritical power and wealth reasons.

You don’t care about the soul salvation, or social support of your parishioners. You only care about bums in the pews, and a continued flow of money into your church, and your paycheck.

At least, that’s what this old non-believer believes!   😯