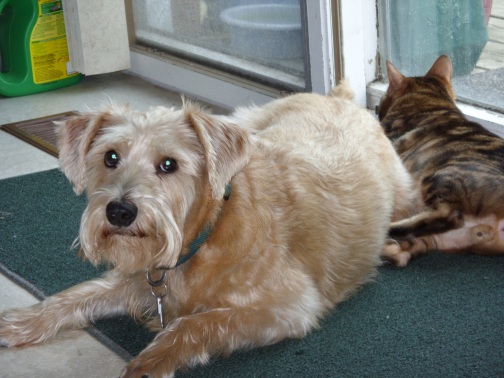 A local business was looking for office
help. They put a sign in the window,
stating the following: “Help Wanted.
Must be able to type, must be good with
a computer and must be bilingual. We
are an Equal Opportunity Employer.”

A short time afterwards, a dog trotted
up to the window, saw the sign and went
inside. He looked at the receptionist
and wagged his tail, then walked over
to the sign, looked at it and whined.

Getting the idea, the receptionist got
the office manager. The office manager
looked at the dog and was surprised, to
say the least. However, the dog looked
determined, so he led him into the
office. Inside, the dog jumped up on
the chair and stared at the manager.
The manager said “I can’t hire you.
The sign says you have to be able to
type.” The dog jumped down, went to
the typewriter and proceeded to type
out a perfect letter. He took out
the page and trotted over to the
manager and gave it to him, then jumped
back on the chair. The manager was
stunned, but then told the dog “The sign
says you have to be good with a
computer.”

The dog jumped down again and went to
the computer. The dog proceeded to
enter and execute a perfect program,
that worked flawlessly the first time.
By this time the manager was totally
dumb-founded!

He looked at the dog and said “I realize
that you are a very intelligent dog and
have some interesting abilities.
However, I still can’t give you the
job.” The dog jumped down and went to a
copy of the sign and put his paw on the
sentences that told about being an Equal
Opportunity Employer. The manager said
“Yes, but the sign also says that you
have to be bilingual”.

The dog looked at the manager calmly and
said “Meow”.

And now for a ‘real’ funny bilingual joke.

Years ago, Charles DeGaulle of France visited Canada. He is still remembered for his ill-mannered and inflammatory shout from a Quebec City hotel window, of, “Vive le Quebec libre.” (Long live Free Quebec.)

Before he arrived, applications were accepted for a post as his driver, to chauffeur him wherever he went.   Aside from the usual requirements, strength, intelligence, firearms and martial arts abilities, driving and map skills, the successful applicant had to be bilingual.

The job was given to Angus MacKinnon, of Nova Scotia, who fluently spoke both English….and Scottish/Canadian Gaelic.