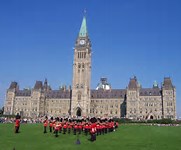 So another year has come and gone, and once again it was time to drive to Ottawa, to visit the grandson and fiancé for a couple of days – a Capital idea.

We hitched up the team, and loaded the buckboard sport-brute.  Grandma and her minions had made another batch of dill pickles.  There were his and hers presents for birthdays that bracket my recent one.  Included were a home-made spelt-flour, chocolate-mayonnaise cake, and special ginger cookies from a local Dutch market.  His always-thinking-ahead mother had even sent Christmas presents, since they won’t be able to get away then. 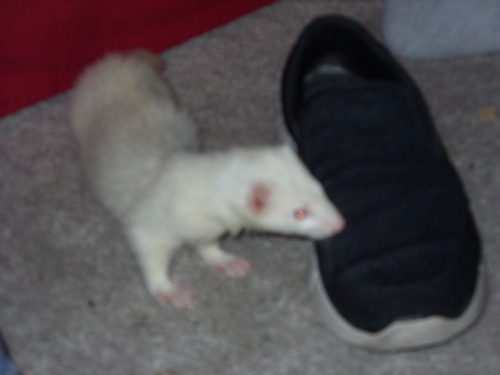 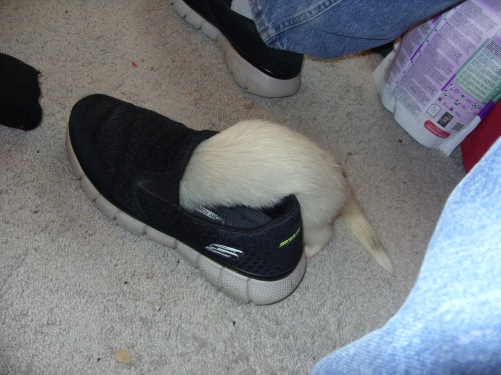 Biggest and heaviest among the freight, was a large steel cage for a recently-acquired, white (but not albino) ferret. She is so friendly and playful!!  I took along the digital camera, but the only photos I took were the ferret ones above.  I used it to prove that I had finally mounted on the wall, the rapier that he gave me for Fathers’ Day, two years ago, because I haven’t got around to publishing the Procrastination post yet.  You guys will have to wait another week or two to see that shot.

All in all, a very interesting and satisfying trip. Food of all types, including a Mexican restaurant named ‘Ahora’, where the nachos came with a language lesson.  The word ahora (Spanish a = in/at/to – hora = time) means Now, in English.

We visited two knife shops, and two second-hand bookstores which reminded me of Charles Dickens ‘Old Curiosity Shop’, stuff piled upon stuff in no great amount of order. We went to the Byward Market, a 4-block-square area, right downtown, full of kitschy little shops, eager to separate visitors from their money before the Government got it as taxes.

Just outside, between the Market area and the Houses of Parliament, stands the American Embassy, as big as a Trump hotel, but with all the architectural flair of a shoebox. Just half a block inside the Market, a mere drunken stagger back to the Embassy, is a ‘Gentlemen’s Club.’  Coincidence??  I think not!  Around the corner was a big century-house, turned into another Embassy, not Russian, but with a sign in Cyrillic lettering – Ukraine?  Uzbekistan?  Perhaps the English sign was on another street.

We went back at night to see the Parliament Building all lit up. No-one was passing any stupid legislation, but we saw where they had installed vents to release all the hot air.

I chose a different motel than last year, this one a mile closer to the grandson’s apartment, and $90/night, instead of $130, enabling us to afford to stay two nights instead of one. It was a family-owned independent, and like the Mexican restaurant, came with a lesson, this one a history lesson, rather than language.

Always curious, and looking for blog-fodder, I approached the day-shift male room-clerk. He reminded me of the wife’s ex-doctor. He could throw a pill or a potion or a medical test at a problem, but couldn’t deal with patients.  I believe that the clerk was on the autism spectrum.  He was happy to supply an extra pillow, or an ice-bucket, but not conversation and trivia.  “Qantas. Definitely Qantas.”

I returned later to talk to the night-clerk, who was both sociable and knowledgeable.

It all started with a mineral hot-spring. The Indians used to soak in it, and believed in its healing properties.  They told the white men, who also used it, and appropriated it.  Around 1900, a white businessman erected a building around it, and turned it into a spa where monied and powerful people came, ‘to take the waters.’

It was quite a way out in the country from little then-Ottawa. In 1928 another businessman built a restaurant nearby, so that the elite had a place to dine after their treatments.  In 1931, when cars were still balky and unreliable, he built a couple of cabins where folks could stay overnight, before returning home in the morning.  Later, he added a couple more, and then another couple.

In 1932 he joined them together into one of the first row motels. In 1956 he added a second, matching row, and in 1973, his son added a third, two-story structure which we stayed in, for a total of 80 units.  The restaurant is still there, although now it’s leased out to chefs whose pretentious menu includes $15 hamburgers and poutine made with French fries cooked in duck fat.

The Federal Government is responsible for the well-being of Indigenous Peoples. Some are brought to Ottawa for medical treatment.  This now includes tests, drugs, surgery and physiotherapy, but many of them still believe in the healing powers of the Manitou’s hot springs.  When we were there, there were 16 units housing Cree and Inuit from as far away as Nunavut, in the Northwest Territories.

Even including an hour each way in the worst traffic in Canada, in Toronto, it was well worth the trip, which totalled 1200 Km/825 Mi. over three days. The grandson who does not own a car, and his magic smart-phone, skillfully guided us around the town.  I’m sure we’ll go again next fall, if not before.