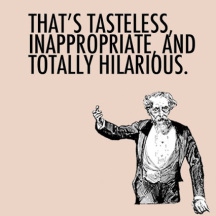 A gay couple set off for their honeymoon; On the plane to Hawaii one says “I’ve got a kinky idea, what if we had sex?”  ”Are you crazy? Here, on the plane? It would be awkward, everyone would watch us doing it” replied the other.  ”Man, nobody is even paying attention to anything. Look!”  He stands up and asks loudly, “Could I have a pencil, please? Nobody gives a damn. Everyone is sleeping, reading, looking out the window, etc.  They really wouldn’t care then, would they?”

So they proceed to have wild sex on the plane. Later, when the plane arrives to the airport and the people are leaving, the stewardess sees an old man who threw up all over his shirt, even his pants are soaking in the filth. ”Sir, you should’ve asked for a bag!”  ”I didn’t dare” whispers the old man. “A few rows ahead of me, I saw a man asking for a pencil and he got fucked in the ass…”

NASCAR is very popular in North Korea, because it has no rights.

A young executive is leaving the office late one evening, when he finds the CEO standing in front of a shredder with a piece of paper in his hand.
“Listen,” says the CEO, “this is a very sensitive and important document here, and my secretary has gone for the night. Can you make this thing work for me?”
”Sure,” the young executive says. He turns the machine on, inserts the paper, and presses the start button.
”Excellent, excellent!” says the CEO as his paper disappears inside the machine. “I just need one copy.”

A guy is driving around the back roads of Southern Ontario, and he sees a sign….

.…in front of a broken down shanty-style house: ‘Talking Dog For Sale ‘. He bangs on the door and the owner appears and tells him the dog is in the backyard. The guy goes into the backyard and sees a nice looking Labrador retriever sitting there. ‘You talk?’ he asks. ‘Yep,’ the Lab replies.

After the guy recovers from the shock of hearing a dog talk, he says ‘So, what’s your story?’ The Lab looks up and says, ‘Well, I discovered that I could talk when I was pretty young. I wanted to help the government, so… I told the CIA. In no time at all they had me jetting from country to country, sitting in rooms with spies and world leaders, because no one figured a dog would be eavesdropping.’

‘I was one of their most valuable spies for eight years running… But the jetting around really tired me out, and I knew I wasn’t getting any younger so I decided to settle down. I signed up for a job at the airport to do some undercover security, wandering near suspicious characters and listening in. I uncovered some incredible dealings and was awarded a batch of medals.’ ‘I got married, had a mess of puppies, and now I’m just retired.’

The guy is amazed. He goes back in and asks the owner what he wants for the dog. ‘Ten dollars,’ the guy says. ‘Ten dollars? This dog is amazing! Why on earth are you selling him so cheap?’ ‘Because he’s a Bullshitter. He’s never been out of the yard.’

An old man was sitting on a bench…… when a teenage skater punk sat down next to him. The kid has tattoos and piercings and a Mohawk dyed a half a dozen different colors. He notices the old man won’t stop staring at him so says to him “What, you’ve never done anything fun in your life old man?” To which the old man calmly replies “Got drunk once, broke into the zoo and fucked a peacock, was just wondering if you were my son.”

Never hold your farts in! They travel up your spine and get into your brain.  That’s where shitty ideas come from.

4 thoughts on “Fun On A Plane”