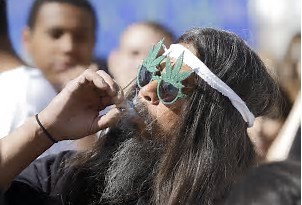 The hippie days of peace, love, beads, and acceptance of other people and their foibles, are long dead. The Age of Information has created more strongly held, and stridently expressed opinions.  I think we can all agree that, despite the push for a more tolerant and more sensitive society, it seems that when given the opportunity to be unkind, people still tend towards putting others down (especially when they have anonymity or the distance that a computer screen provides).

The ‘highway’ is too often clogged with intolerance, now it’s just “My way, or I’ll hate you.” It doesn’t seem to matter what the issue – abortion, religion, politics – often mixed together, there just seems to be no middle ground anymore.  Nobody wants to listen to the other guy.  It’s become two greatly divergent solitudes, neither side ‘winning’, but screaming louder and louder, to appear to.

Red States – Blue States – The United States may soon become the Un-United States. It’s as close to Civil War as it has been for over a century and a half.  Political ‘dialog’ often degenerates to the likes of:

The Democrats once again want to tear this country apart simply for slavery.  What disgusting selfish, evil scumbags these partisan shitstains show themselves to be. Again, the lying, lack of remorse, pervasive harm and pain, and mocking of well accepted standards and boundaries, this is the basis of evil, folks.

I am saddened by the rift in the United States, because people are less able to discuss the issues and ideas, and much more able to insult the fact that an idea is either left or right. The ridicule and the name calling on political affiliation has turned political dialog into hateful attacks.

Insulting the people who lean one way or the other does not bring our current society forward. We won’t always agree, but we can take a look at what the other side is attempting to achieve.

Come on kids, play nice with each other. As David Bowie asks in his song, Under Pressure, “Why can’t we all just get along, get along, get along??” At least listen to why the other fellow thinks and feels the way he does. Nobody learns anything while he’s doing the talking, and nobody gets his way all the time! 😯