That title’s a vague, old, Star Trek, Voyager reference, and it’s still not the fourth, it’s merely number four, on a thirty-day list that I’m chaotically crashing through.

This list creator is seriously disturbed.  You could be, too.  There is not enough vodka or qualified psychiatrists in the world, to erase the mental picture of me, rolling out of the old fart sack.  For a while, I dated only blind women.

When I first got married, I slept in the nude, because – you know – sex could break out.  My wife informed me that, when it came to sex, I was self-sufficient, so I took the problem in hand.  Sex did occur a couple of times, and soon we had a couple of kids in the house, one of them female.  I couldn’t go looking for my BVDs in the dark when one of them had a bad dream, or go wandering down the hall with my dangly bits….uh, dangling.

I took to going to bed in my undershorts, and continued for decades.  Never know when you’ll have to run outside to escape a fire.  The house is 72/73 F, summer and winter, although we have an electric mattress warmer to keep us cozy in the winter.

When my doctor confirmed the diagnosis of an enlarged prostate, she prescribed a medication that will shrink it, and keep it shrunk.  Without any explanation, she asked me if I wanted Cialis.  That’s like offering a dog a driver’s licence.  Erectile dysfunction didn’t seem to be the problem, so I said no.

After doing some research, I discovered that drugs like Viagra and Cialis were originally developed to increase blood flow.  When test subjects were asked if they experienced any side-effects, many of the men replied, ’Uh, yeah.  I don’t roll out of bed anymore.’ and a lucrative secondary market was discovered.

The maintenance dose of Cialis that I was offered is supposed to increase blood flow, to help the medication work, so I quickly said, yes.  As I neared 70, my normal low blood pressure and slow heart rate were no longer enough to keep my feet warm enough to sleep at night, even with the Cialis.  Perhaps at my next doctor’s appointment, I’ll ask for a higher dosage level. 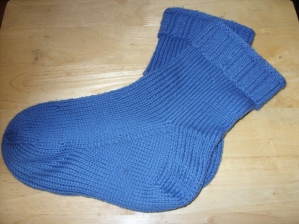 The wife made me a hand-knit, custom-fit pair of socks, which I wear to bed over my regular socks, and sleep comfortably.  They, and my bikini briefs, are enough to allow me out on my back deck, when the new puppies start rowdying in the morning, ‘cause no-one lives behind me, to see what I wear to bed.  😉