I have been proved wrong – again!

I told the wife, that when our Wheaten/Schnauzer/Poodle–cross cur was gone, we would not get another dog.  I explained a thousand times that we are too old, too weak, that we didn’t have the strength, the stamina, the patience….most of all, the money, to buy a purebred, non-allergenic puppy. 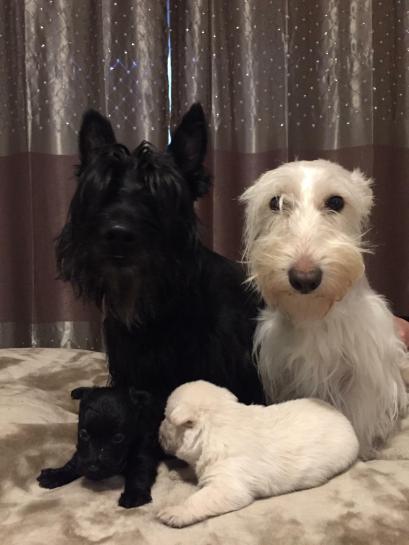 Our two new little handfuls, with their black Daddy, and white Momma.

By ‘we’, of course, I meant ‘me.’  Suddenly, one day, while I was composing a previous A-To-Z post, she called to me to “come see something on my laptop.”  Halfway down the stairs, I saw the picture of Mom and Dad Scotty Terriers.  Before I could even protest, she shifted to more photos of a bundle of the cutest puppies.  Ohhh, no fair!

Scottish Terriers are usually black, but some of them are white, and a few of them are brindle, which is white, with blonde/gold highlights.  Mom was white.  Dad was black, and the puppies were some of each.  Could we just go to look at them??  They were only a 2 ½ hour drive away.  I’m doomed – doomed I tell you.

We brought the son – and his checkbook – along.  They valiantly held out, but we all knew that we had not come just to look.  The wife picked the little black female, above.  Then came the hard sell.  Unlike the previous litter, this time the breeder was having trouble getting rid of the males.  If we would also take a male, she would give us a screwing deal on both dogs.

The wife launched a piteous appeal to his heartstrings, to get the son to further loosen his purse-strings.  When he finally bowed to the inevitable, we became a two-dog family.  Happy birthday, Mothers’ Day, Arbor Day, Thanksgiving, anniversary, Christmas, and Leonard Nimoy’s bris.

The next day, we got a panicked phone call.  “Is something wrong??”  Well….  Another couple had come to look at the puppies, and she was attaching ribbons to ours, to assure that we got the ones we’d picked out.  The male the wife had chosen, the only brindle one in the litter – had turned out to be a female??!  Would we accept any other male?  We chose the happy, chubby white male, as a Mini-Me.

We named the male, Duff, a Gaelic word that means ‘black.’  We called the little female, Guin, a Welsh term which means ‘white.’  So, our black dog is White, and our white dog is Black.  At least we’re not out Walkin’ My Cat Named Dog, as Norma Tanega did, back in the mid-60s.

Here’s a liter of IRONY!

I only hope that the male pulled that plug from the socket, before he chewed it off.

At just over six months old, they recently got their first trim.  We had to be vetted by our new groomer.  She was recommended by the wife’s hairdresser.  The woman came to the house to see the dogs in their ‘native environment,’ before she would accept us as clients.  I feel so 90210. 😯 Oh Yeah!  We’ve got two new puppies.  Be thankful that you’re only stuck with me.  At least I’m house-trained.  😉

They’ve gone from being a mere handful, to being A Real handful.