My recent host and hostess were not interested in money.

I took along a few foreign bills, and odd coinage, to show them.  There was some vague interest in the mis-cut American $1 bill, the somewhat rare American $2, and some chuckles over the ‘Slick Willy’ Bill Clinton $3 fake bill.  The lack of interest may have been because he’s a soldier who has been posted all over the world, and seen much of these firsthand.

The interest ramped up when I showed the collection to her younger son and his girlfriend.  We played a game of, ‘You show me yours, and I’ll show you mine.’  Only partly because his step-father is a soldier, he has amassed a promising collection.  Going through my catalogue, we found a British Armed Forces, £1 occupational scrip which Rants might have been interested in.

He kindly offered to let me take any of his bills and coins, because he merely keeps them, not mounts and displays, as I do.  He had 16 or more countries’ bills.  I could have asked for all of it, but restrained myself to three countries that he had duplicates of. 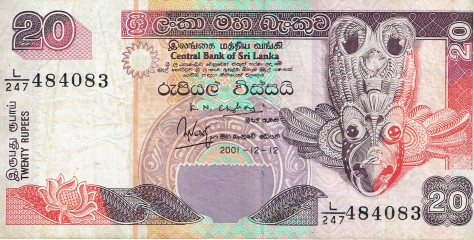 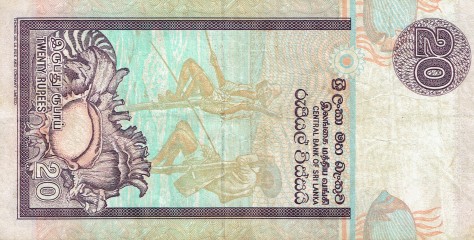 As luck would have it, they’re all from the same general area of the world.  The Indian 10 Rupee, and the Sri Lankan 20 Rupee, are both paper, and printed about the year 2000.  The Singaporean $2 is newer, and made of polymer plastic with all kinds of security features that prevented me from taking a photocopy of it.  I did my usual money laundering, and washed and ironed them.  Singapore had a hard fold in the center, which even mild heat wouldn’t flatten completely out.

Pawing through his coins, suddenly I had British King George V looking up at me from a large coin.  I knew it wasn’t Canadian.  Might it be from England – or Jamaica – or Australia??  Turning it over, I was amazed to find that it was a 1919 Newfoundland Half Dollar. 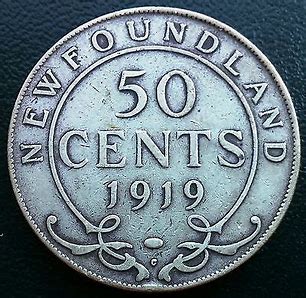 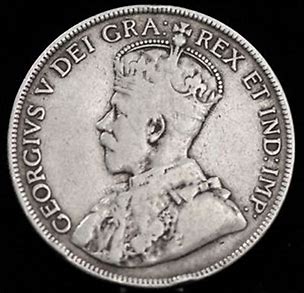 I explained to him that Newfoundland was the 10th province of Canada, but didn’t join
Confederation until 1949.  Until then, they had their own coins and bills, minted and printed in England.  I have long wanted at least one Newfy coin to add to my collection.  Not produced for almost 70 years, I had long ago given up much hope of finding any.

Since he didn’t even know what it was, and it plainly meant something to me, he insisted that I take it.  A caring mother has obviously raised a kind and generous child.  Before I left, BrainRants gave me a quarter-sized United Arab Emirates 1 Rial coin, which he didn’t obtain while he was serving in the army, but rather, he found it, going to work on the bus, in cosmopolitan Washington DC. 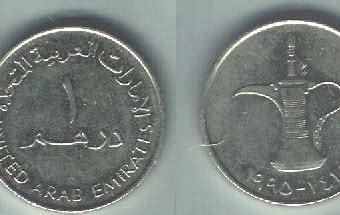 I have many other foreign bills that I will publish pictures of in a post one day, as soon as I work off the procrastination.  Till then, I am always happy to have you visit.  Come again, y’hear!   😀

7 thoughts on “That Fills The Bill”