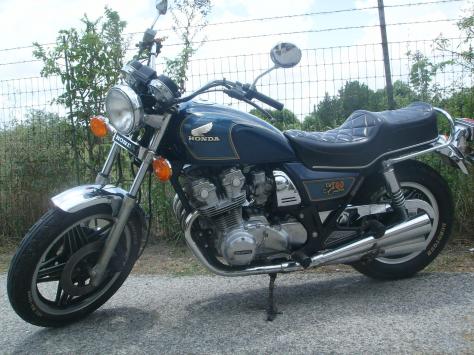 My first motorcycle was little more than a scooter, an anemic little, 450 CC ‘learner bike.’ After I’d got a year’s safe riding experience, and resisted the impulse to let’er rip, I decided to trade up to something a bit bigger, more powerful, and able to carry my fat ass adult frame.

I saw a 750 CC model that I liked, advertised in the newspaper. It said, “Available to view any time” so I rode over. Somebody’s wife let me have a look at it. He had removed part of the front fairing, and dismantled the air-intake system. “Are you interested?” It seemed that she was interested in getting rid of it.

When I jostled it, there was no slosh from the gas tank, and it had sat so long that the tires were soft. It had been ignored, perhaps neglected, for some time. Probably the battery needed a charge. I told her that I wanted to know for sure that it would start, first time – every time. I wanted to hear it run, and I’d like to take it out for a short test ride. It seemed in good shape basically, with low mileage (Canadian kilometrage).

“I’ll get my husband to put it all back together and get it running some night this week, or on the weekend. Come back in a week, and it will be ready.” I didn’t get back for almost two weeks, and thought it might already be sold. No worries, it was still in parts.

“Would you like to take it?” I don’t take any pig in a poke – “I don’t think so.” “Well, I know my husband wants to sell it.” I said, “No he doesn’t. If he did, it would be ready to ride away. He wants somebody to just come along and buy it. That’s a very different thing.”

Which brings us, by motorcycle, to a recent blog-post, titled, I’m 34 And Never Been Kissed. I’d like to feel sorry for this gal, I really would. Heaven knows, she started out in life with several strikes against her. She was born and raised in a Fundamentalist Christian small town near Waco, TX. She was home-schooled by her mother, and not allowed to date, or use makeup, till she was 16.

By the time she entered the social swirl, the gals who’d been ridin’ herd on the guys, since they were 11 and 12, had them all roped in and hogtied. She saw some fellas that she was interested in, but didn’t know how to show enough interest in them, to get them interested in trading up.

It only got worse when she went to University. Her girlfriends and fellow-students were all too busy with boyfriends, and fiancés, and engagements, and weddings, and careers and/or families to even pass along some rejects.

She studied hard at school, got great marks, and got a fantastic job with a generous salary. She has a BMW, and a well-furnished condo in an upscale, security building. She has female friends that she socializes with. What she doesn’t have….is a man.

She says that she doesn’t even want a man, just for the sex. She would like someone to talk to about their life, someone to kiss her, and hold her hand, and pat her back and maybe rub her feet, and cuddle with on the couch, while they watch TV.

Her female friends tell her that to get a man, she’s going to have to put some work into it. She dismisses that suggestion by saying that she’s not going to change who and what she really is, just to trap a guy. I believe that she is mistaken, and misinformed.

There is no need to make any basic changes. She may have a wonderful product, but it needs to be marketed. She doesn’t want to leave her comfortable rut to sell herself. She just wants someone to come along and buy. Without some advertising, any suitable guys won’t even know that the product is available. 😛