I had a month…. Actually, I had a year from when I chose to do this year’s version of the A To Z Challenge – but realistically, I had a month to get this post for the letter V ready. I had posts composed for the letters T and U, so I had four weeks to get my act in gear – four weeks to choose a V-shaped word, pick a theme, light a flame of composition under it, and bring it to the boil of intelligent presentation.

Instead, I spent an inordinate amount of time debating with Christian Apologists. Some guy who styles himself TheistThug, and lives up down to the name, really needed an opinion readjustment, and I was just the guy to do it. Saturday night, instead of dutifully typing, I watched some fool build a log cabin in Alaska, and read part of a book…. because it has 800 pages, and needs to be returned to the Library in 17 days.

A character in the book returned to her tough childhood neighborhood after escaping it at 15, and being away for another 15 years. She observed that the worldly-wise woman that she was now, barely matched the frightened teen who left it years before.

There were all my V-word candidates
venal
vivacious
vapid
vicinity 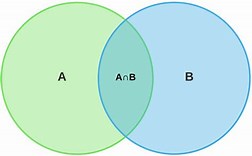 when suddenly “Venn diagram” stood out. Venn diagrams visually indicate how and where two or more different sets of data do, or do not, overlap. They help making decisions which will satisfy the greatest number.

For most of us, the Venn diagram of our early life, compared to our current life, need not be quite as severe as hers, where only a tiny point intersected the two segments. Still, it seems a good idea to strive for continual change and improvement. Get smarter, better, and happier. I know that I am not the same naïve, trusting, callow young man who ventured into the World and wedlock 52 years ago. If I could only enlarge that “Get Projects Finished On Time” section a bit…. 😉