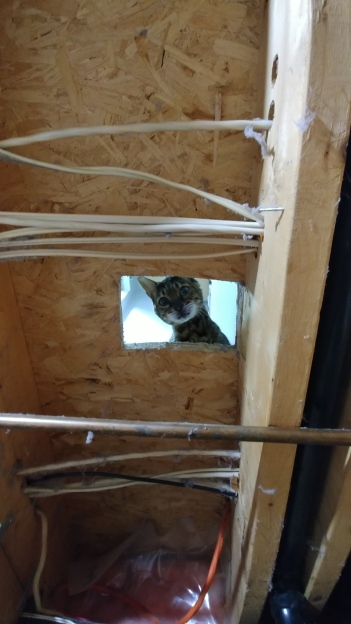 (The un-named) They say that curiosity killed the cat, but I say that some curiosity, mixed with a healthy dose of skepticism, and cynicism, can prevent you from becoming a manipulator’s cat’s-paw.

I once worked as a Purchasing Agent for a Bernie Madoff-wannabe owner of a small business – a little metal stamping shop with 25 plant employees.  He apparently had dreams of more and larger automotive contracts, a bigger plant, and 250 employees – or 2500…. Or 25,000!  😯

He had loyalty and honesty only for himself and his company, and no commercial morality.  Management staff were told not to ever allow any barricades to his business – “over, under, through or around.  Don’t come to me with problems!  Come to me with solutions.  Rules are for fools.”

I hired a young man in his early 20s, as a Production Control Clerk.  He was getting married, and he asked the company President for a mere two days off, for an abbreviated honeymoon.  The boss gave him an extended lecture about how he should not even get married.  He should reserve his time and energy for the company.

The Boss was on his second wife.  I don’t know why they bothered to marry – social propriety??!  He put in 12-hour weekdays, often 8-hour Saturdays, and sometimes came in on Sunday.  I don’t know if they ever dined together.  She was a Middle Manager, putting in lots of hours herself, and had girlfriends and hobbies.  He had…. the company – and a disturbing habit of drinking in his office at the end of workday.  He often chivvied me and other staff to remain and keep him and his booze company.  😦

Back in 1982, debit cards didn’t exist, and credit cards weren’t common.  One day he asked me if I had a credit card.  I answered, yes.  “Well, you should get yourself another one.”  Why??!  “So that, when I tell you to buy something for the company, you can keep the charges separate.”

He was already paying 30-day invoices at 120 days.  He expected me to use a personal card to purchase company supplies??!  What assurance was there that I would ever be reimbursed?  I quietly declined to get sucked in.

One day, he wisely decided to computerize the entire office system. (Yes, there was a time when computers weren’t everywhere.)  He hired a tech-nerd who could do the job.  Coincidentally, the guy just happened to have experience in the Purchasing field.

He interrogated other office staff, but, for three weeks he spent a lot of time with me, finding how I had set up my process.  Finally, the boss came to me and said, “Business is slow right now.  You’ve got your paperwork well-organized.  If I give him some assistance, Roscoe and I can handle it.  I’m scheduling your hours to zero for now.  You don’t need to come in.

I never even got fired.  He just stopped paying me.  Losing any job and its income can be quite traumatic, but I was actually (eventually) happy not to be employed at this one, when the police, or the bankruptcy bailiffs, showed up.  Rules are for fools eventually killed him, when he violated flight regulations and splashed a rented 4-seater all over a friend’s pasture.