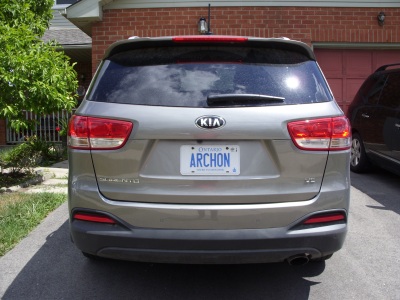 The son recently collided with “What If?’
Somebody rear-ended him on his way home from work.

He left work at 7:30 AM.  Four or five blocks down the 4-lane, cross-town thoroughfare, he realized he’d forgotten his drink thermos at work, and went back to get it.  Back on the road again, he was soon humming along in the center lane, in light, 8 AM traffic.  Suddenly the car, two vehicles ahead, came to a complete stop, to make a left-turn across two lanes of oncoming traffic.  The car behind it slammed on its brakes, and the son managed an abrupt stop.  He just had time to look in the rear-view mirror to see a windshield way too close.

Now the What If kicked in.  What If I hadn’t gone back?  I’d be home, safe, having a snack.

The other driver works in the next city, 15 miles away.  He was also coming home after a midnight shift – a little tired, a little distracted, with perception, attention and reflexes a bit slowed.  The son lifted the tailgate, and used the big, flat storage surface as a writing desk to exchange information.  We both have the same insurance company, just different brokers.

Neither driver called the police, but someone must have.  Soon, a sport-brute, Police power-wagon pulled up behind them, and Officer Zygote turned on his flashers and climbed out.  The son said, “I felt like John Wayne in True Grit.  Hell, I’ve got work-boots older than this kid.  Is he really old enough to drive that thing?”

He spoke to the cop first.  They were just finishing when a steady drizzle began.  He and his co-worker passenger sat comfortable and dry in the back under the improvised awning, while the other two exchanged info in the rain.  It’s not the vehicle damage that’s the biggest piss-off.  The insurance company will pay to fix that.  It’s the lost time, and bureaucracy.

Already 30 minutes behind, the officer told them that they had to go to the Police Accident Reporting Center on the south edge of town.  The son dropped off his co-worker, and drove another 20 minutes to get there.  With COVID, you don’t just walk in and report.  There’s a sign on the door, instructing people to text an extension.  You are assigned a number, and wait your turn.  Thinking that there would be a delay, the son called home to report, and woke me.

He was immediately called in, and had to tell me that he’d call and explain later.  Cute, little, blond, female, Special Reporting Constable took his report, and slapped a Police sticker on the bumper.  She was impressed that he had all the necessary information at hand.  Car accidents do not bring out the best in people.  Many of them stumble in, not sure of their own name, much less the other driver’s, licence plates, insurance policy numbers, etc.

Now the clerical haze began to thicken.  First, the son re-called me, and explained.  When he arrived home, it was after 9:00 AM, so he called the actual insurance company.  Then he called the broker, and talked to the agent.  Then he called his passenger to tell him that he was now part of an official accident report, and might get a call from police and/or the insurance company.  Next, he chose one of the two authorized repair shops, called them, and drove over for an inspection and repair estimate.

Damn these all-electronic cars!!  Two of the three back-up proximity sensors don’t work.  The impact is barely visible to the naked eye, but the entire wrap-around bumper may have to be replaced.  A June-bug splat may take $2000/$3000 to fix.  We might never know the final cost.  The insurance company will pay, and the agents can argue it out.

On the way home from the body shop, the son heard a traffic report on the radio.  We have a report of a collision in the center, westbound lane, Victoria at Chestnut.  Property damage, but no report of injuries.  Be careful in that area.  The son said, “That was over an hour ago.  I’ve been home twice since then.  I always wanted to be on the radio, but not this way.”

Since the car would be in the shop for several days, he had to call a car-rental agency to arrange for a replacement.  He took a pain reliever and a muscle relaxant.  The wife told him to call the Chiropractor, who had an immediate opening, and took him in, but he had to later call the insurance company again, and speak to the Personal Claims clerk to get this, and continuing treatments, covered.

What if?  What if??  What If??!  Like the story of how a wasp in a car caused an accident and killed three passengers, such a tiny irritation has caused so much chaos and confusion.

We lost our handicapped parking permit.  We took it from our car, and put it in the rental.  When we returned the rental to the body shop, we both forgot to remove it.  A week later, some woman in a parking lot got pissy when we pulled into a handicap spot.  “Where’s the permit??”  The repair shop staff deny ever seeing it.  The young man from Enterprise, who retrieved and cleaned the rental, claims it wasn’t there.  Today, we begin the arduous bureaucratic, and possibly expensive, task of replacing it.