Take me out of the ball game.

In the early 1960’s, before I arrived in this burgh, interest in, and support for, Junior, City-League Baseball was waning.  One local team felt that they needed $10,000, a considerable sum, to pay for a year’s uniforms, equipment and transportation costs, and no sponsors were coming forward.

One 16-year-old, baseball-crazy boy had an idea.  He would sit on a 6’ X 6’ platform on top of a 50 foot flagpole in the ball park, until the amount was raised.  He lasted three days, until unexplained stomach pains caused the same fire crew and ladder truck that put him up, to lower him down again.  His almost-feat was recently recounted in the ‘Flash From The Past’ history column in a Saturday newspaper.  His name was Ken Fryfogel.

Things I Learned While Researching Other Things – Act 2 – Fryfogel

The name Fryfogel is very uncommon.  Ancestry.com only has 298 listed in North America.  The unnumbered few in Canada are all in Ontario, and I suspect, most right here in Southwestern Ontario.  I decided to research.

Fryfogel appears to be a Germanic name, like Vogel – which is a bird, or Logel – who was a cooper.  Surname-meaning websites just shrugged.  I tried a translation website, but got nothing.  I tried changing the spelling from ‘el’ to ‘le.’  I tried pulling it apart, into Fry, and fogel – nothing.  I tried entering ‘fogel’ into a dictionary site.  I got, No listing for ‘fogel.’  Did you mean fodgel?’

I don’t know.  Do I??!  I’ve never run into the word.  What does it mean?   Yorkshire/Scottish dialect – a short, fat person-by extension, a fat hen.  So, a Fryfogel is someone who cooks up a big fat chicken.  Twenty miles from here, at the intersection of a concession road and the highway, halfway to Justin Bieber’s ex-home, stands the historic, 200-year-old Fryfogel Inn.  😎  What better name for an innkeeper than one that says that he’ll serve you up some fried chicken along with your ale? 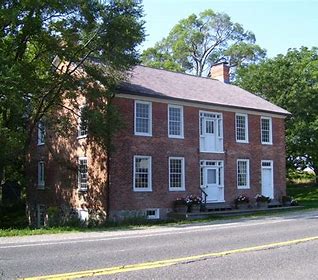 I’ll be serving up some more interesting drivel in a couple of days.  Hope to see you then.  😀