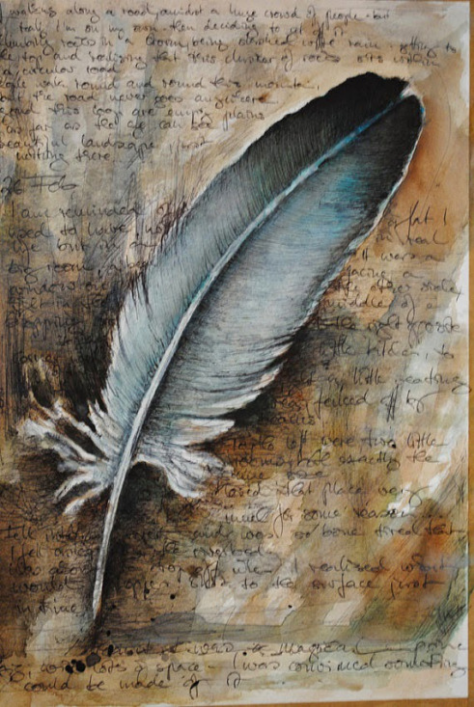 I found a feather today, and along with it, I recovered a piece of the peace of my childhood. I found a sea-gull feather.  I found nostalgia, and I wallowed in it.

I was born and raised in a small town on the eastern shore of Lake Huron. The sand-bar island, half a mile offshore was/is a sea-gull nesting-site protected Provincial Park.  We had sea-gulls!  Lord, we had sea-gulls.

They loved the 4 or 5 fishing boats that went out each day. Swimming at the beach, late in the afternoon, I could watch a fish-boat heading back to the river harbor, towing a 100-yard kite of gulls behind it.  The fishermen gutted the fish on the way home, and dumped the offal in the lake.

Actually, of course, these were ‘lake gulls.’ Few, if any, ever saw salt water.  Their deep squawks were a constant summer background sound-track.  Later in life, I found that the gulls on Lake Erie were the same breed, but for some reason they cried like they had sinus infections – their calls much higher and shriller.

The simple discovery of a feather brought back childhood memories of fun, freedom, warm summer sunshine, tourists, fast-food and nothing to do, but hundreds of things to do.

As innocent children, we found many things to do with a feather. We could wedge it in our hair, or tie it on with a string or an elastic, and be an Indian in the games of Cowboys and Indians….before it became politically incorrect, and an insult to Aboriginal Rights.

I’ve cut the bottom off larger feathers at an angle, and split the longer edge, to create a quill. Sadly, all too often, instead of elegant writing on a sheet of paper, all I produced were ink-blots that would make Rorschach proud…or curious.  There’s a real art to it; one which I never mastered.

As a teen, my friend and I would split several lengthwise, and glue them to a piece of dowel we’d bought at the lumber store, ‘fletching’ it to produce an arrow. For a tip, we’d add a filed-down sliver of split-off railway track.  We could have just bought a target arrow from the hardware store, but what’s the fun in that?

Aside from fish guts, another thing that seagulls clean up is edible human waste. They keep down infections by keeping down the rat population; it’s why they’ve been declared a protected species.  In my warm, fuzzy home-town, they kept the streets cleaned of dropped tourist (and native) hot dogs, French fries, ice cream cones and popcorn.

My current home is, sadly, much closer to Lake Erie than it is to Lake Huron, so the gulls shriek with a nasal twang. There’s a landfill site behind the plaza where I found the feather, and at least 12 eating establishments inside it.  With the help of some sparrows and chickadees, they keep the grounds clean.

When I found the feather, it took me on a lovely flight of retrospective fantasy. I didn’t even pick it up, but left it, hoping that another young Archonoid would jam it in his hair, or take it home to tickle his sister with.  Perhaps even, an adult would see it, and be winged into some pleasant thought or memory.

Everybody, meet Steve.  Steve, meet everybody.  Steve is very quiet, because he’s dead.  We’ll get back to that in a while.  Several of the bloggers I follow have ongoing series of posts about one of the weird and wonderful characters that infest their life.  You’ve already seen why this will not be a continuing set of tales, but I thought you might have some small interest in a guy who provided carefully concealed amusement, for me, and others, for twenty years.

At about five foot, four, Stevie – but never where he could hear you call him that – was like Grumpy the dwarf, or Papa Smurf with hemorrhoids!  He strutted around like a little Banty rooster, and that’s what he always sounded like – or like KayJai – fuck, fuck, fuck, fuck!  Not really depressed, just low-level pissed off at everything and everybody, all the time.  Voted most likely to be found on a tower with a sniper rifle.

He was a highly competent worker, turning huge piles of sows’ ears into silk purses all the time.  He didn’t like the raw material, but then, none of us did.  He didn’t like the machinery, or the way the maintenance department kept it.  He didn’t approve of local plant management or senior company executive policies.  Like a stopped clock being right twice a day, they eventually drove us into bankruptcy and unemployment.

While he could appear friendly, he didn’t like people, especially women.  Have you seen or heard of the movie, ”The Forty Year Old Virgin?”  When I joined his line, he was thirty-six, and wouldn’t go near one.  The earthy old woman I took over the job from, offered to take him home and make a man of him.  It was like watching the Tasmanian Devil.  I thought his head was going to spin off.

He was also nicknamed Birdman, an appellation he was somewhat proud of.  He had a huge, encyclopedic knowledge of tropical birds, parrots, cockatoos, toucans and macaws.  He owned several, which he allowed to fly free, inside his house, when visitors came over.  He was sometimes contacted by humane societies, pet stores, or other owners, about found, injured or ill birds.  Stevie nursed them all back to health.

Steve didn’t like anyone in any position of authority, especially politicians.  He had a particular hatred of the Liberal Party, and PM Pierre Trudeau.  Don’t get him talking, he never shut up.  He was always threatening to sue someone for something, but never got around to it.  He had a constant quartet of epithets that he doled out regularly.  Blow it up!  Burn it down!  Kill ‘em all!  Call my lawyer!

My friend’s line was down one day, and he came over to talk to me while I worked.  Being polite and sociable, he thought he’d acknowledge Steve.  As he walked past, all he said was, “Hi Steve.  How are you today?”  Five minutes later, he had to pry his ear out of the monologue.  “Fucking useless politicians!  They’re gonna drive this Goddamned country into the ground.  We should kill the whole bunch of those stupid assholes and burn the fucking Parliament Buildings down.”  My buddy finally escaped and came over to see me.  He said, “You know what?  I haven’t spoken to Steve in eight months, and it’s as if the conversation never ended.”

The company installed a new piece of equipment one time.  Local management came around and wanted to take a picture of it for promotional purposes.  Steve refused to continue working while that happened, like an Aboriginal, afraid that the magic box might steal his soul.  “That’s not what I get paid for.  Take a picture of it between shifts, or have someone else do this job while you shoot pictures.  I’m not going to be in your Goddamned advertising!”

A casual inquiry about his family, one day, revealed that he hated them too, mother, father and one brother.  They were all too nosy and pushy, and wanted to run his life.  He left home when he was sixteen and had barely spoken to them since.  He blamed his parents for passing on defective genes.  He was sure that he would die before his time of some weakness that he’d inherited.  Maybe he was right, maybe it was the stopped clock thing again, or maybe it was losing his job and his purpose in life.  A year after the company closed, he passed on.  As a loner who made me look gregarious, he had no newspaper obituary.  I don’t know what took him.

I don’t know about winter time, but in the summer he liked to go commando.  Working with hot vinyl, he liked to wear loose-legged track shorts.  “Hanging out with Steve” took on a whole new meaning when he balanced on one leg and reached forward.  Princess Purity, behind me finally had enough, and complained to the area supervisor, who spoke to the plant manager, who informed the union executive, who called in the union rep to have a little talk to him about baring his soul, and other portions.  He dyed his hair and “manscaped” himself years before it became common, or even acceptable.

Probably because he was so abrasive, he had trouble with the teenage boy who lived next door.  The kid would jump the fence and steal, or damage, or just move stuff around, to piss him off.  He tore out the four-foot wire fence and installed an eight foot wooden fence all around.  The kid figured out how to get over that too.  He complained to the parents a couple of times, but they denied that it was their kid, so he covertly installed video cams and a recorder.  After another invasion, he invited the parents over to see a little movie.  He told them that the next time it happened, it would be the police viewing the tape.

I’ve never seen anyone work so hard to be happy by being unhappy.  I was never one of the very select few invited to his home, but I miss him, if only because society needs a leavening of people like him to help the rest of us feel normal.

http://granmaladybug.wordpress.com is now on the air, dispensing wit and wisdom about cats, candles and cooking.  Only the brave need apply.