The rocky birthday isn’t mine. That will occur on the weekend, and you’ll be able to hear about it without even turning your computers on.  With all my abilities, I couldn’t organize an orgasm in a bordello, but, I kinda, sorta, wanna organize a Happy Birthday party for a blog-buddy of mine.

I would like everybody who visits this site, today, Sept. 17th, or even over the next couple of days, to click on http://sightsnbytes.wordpress.com/ and wish my friend Ted a happy birthday.  He may need some cheering up, because today he turns 51, and joins me on the wrong side of the half century mark.  I wouldn’t mind if you mentioned this post.

The rocky reference isn’t just about birthday numbers. Ted lives on Newfoundland, our easternmost province.  It juts out into the cold North Atlantic, like Canada’s ass hanging over the edge of a bed.  Its residents lovingly refer to it as “The Rock.”  Fortunately, Ted lives on the western coast area, where you’re slightly less likely to find an iceberg in your back yard bay.

Like many of us, Ted has worked at a variety of jobs, to support himself, and now, a new wife, and a stepson he cherishes, and seems to be making a great father to. He’s worked at jobs he liked, but didn’t pay great, and he’s worked at jobs he was overqualified for, didn’t like, and which didn’t pay great.  He recently published a post about them, and about going back to university as a mature student to better himself.

He’s finally obtained a job he likes and which allows him to support the wife and young’un in the style they all deserve. Things are simpler and slower on The Rock.  Used to life in urban areas where you can walk to work, he’s now dismayed at the prospect of a 45 minute commute.

His retraining was in Information Technology, I T.  He has graciously helped me, and others, with problems here on WordPress.  The pictures like the map at the top, which I now sprinkle throughout my posts, are there because he told the wife and me how. He explained it to the wife, and, a year later, she finally got it through to me.

Ted and his Rock are a little removed from the usual hustle and bustle of “civilization.” The well-written posts on his site are bucolic, and often about life at a slower pace.  They limn the fascinating life and times – the friends, and family, and neighbors – of a most interesting writer.

I suggest you visit, and sign up for a rewarding ride. Don’t forget to wish him a Happy Birthday!  I won’t. 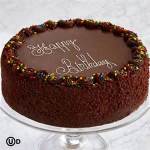 (I didn’t know which you liked more, so I got you a chocolate one.)