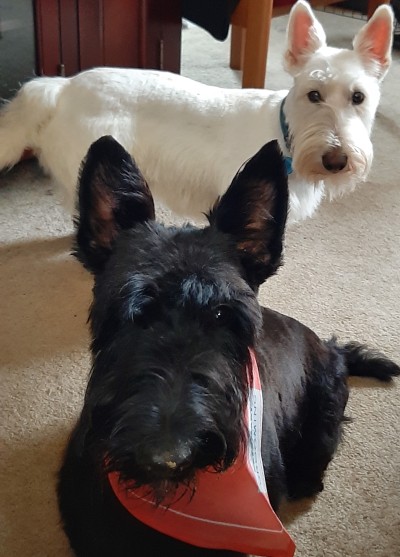 One day an old woman walked into a shop and got some dog food.  She went to pay for it and the cashier said, You can’t buy that dog food, we need evidence that you have a dog, so she brought in her dog and she got the dog food.

The next day the same old lady went to get some cat food and the cashier said, You can’t have that cat food, we need evidence that you have a cat, so she went home and got her cat and she got the cat food.

Next day the same old lady went in again and she had a box.  She told the cashier to put her finger in it, so she did.  She said it felt warm and soft.  The little old lady then said, now you’re satisfied, can I have some toilet paper please!

Mom and Dad were trying to console Susie whose dog, Skipper, had recently died.
“You know,” Mom said, “it’s not so bad.  Skipper’s probably up in Heaven right now, having a grand old time with God.”
Susie stopped crying and asked, “What would God want with a dead dog?”

A woman is having an affair during the day while her husband is at work. Her nine-year-old son comes home unexpectedly, sees the illegal lovers and hides in the bedroom cupboard to watch. Then the woman’s husband unexpectedly comes home.

A few days later, the Father says to the boy: “Grab your ball and boots, let’s go outside and have a game.”
The Boy says: “I can’t, I sold them for $ 600.”
The Father says: “That’s terrible to overcharge your friends like that… $ 600 is way more than those two things cost.  I’m going to take you to church and make you confess your “SINS.”

They go to church and the father makes the little boy sit in the confession booth and he closes the door.
The Boy says: “Dark in here.”
The Priest says: “Don’t start that shit again!”

A newspaper reporter was writing a feature story about prison life and was interviewing one of the prisoners. “Do you watch much television here?”

“Only the daytime shows,” the inmate said. “At night we’re locked in our cells and don’t see any television.”

“That’s too bad,” the reporter said, “But I do think it is nice that the warden lets you watch it in the daytime.”

“What do you mean, nice?” the inmate said. “That’s part of the punishment.”

Title: A World Lit Only By Fire

When I published my Torture of Faith post, my well-read and well-respected visitor, Jim Wheeler, suggested the above book as background reference reading, to explain the historical era.

As too often happens, I whined and wheedled. My library didn’t have a copy that I could borrow for free.  The nearby Chapters bookstores didn’t have a copy in stock.  I could order one, but objected to actually paying for it.  Jim sensibly reminded me that I had obtained the copy of Malleus Malificarum(Wiki link) thru Inter-Library Loan; I could do the same with this one.

The book eventually arrived, not from the gigantic Toronto Library system, but from the King Township Public Library – Nobleton branch. King Township is part of what is known as the Holland Marsh, the most fertile part of Southern Ontario, north of Toronto.  Nobleton is a town of 4000 located within it.  Why this rural area would have a copy of this book, when the metropolis doesn’t, is a mystery.

I was in love with it before I even got through the introduction. It introduced me to the word ‘catenas’, which are things or occurrences that lead inevitably, like links in a chain, from one to the next.  Like the chain they describe, I linked it to two other words I already knew, ‘catenary’ which describes the shape of a free-hanging chain, (Think McDonalds Golden Arches – or the St. Louis arch.) and ‘concatenation’, which is the formation of a chain of events.  I know!  There’s only two people in the world who give a shit about this verbal trivia – and I’m both of them.

This book should be required reading for all the blindly-believing ‘Good Christians’, especially Catholics. It describes over two hundred years of some of the most sinful, licentious behaviour of The Church, from the local priests, right up to the Archbishops and Pope.  The Church was operated for the benefit of the religious leaders.

Tithe money bought opulent palaces and jewels and extravagant clothing – and wars to conquer countries to wring more money from. While thousands starved in the fields, the Pope threw lavish, drunken parties.

Sex was a competitive sport. The Vatican supported two whorehouses, which explains people with the name Pope.  They are descendants of bastard sons.  Many convents operated as brothels, funneling money from the nobility and rich merchants into The Church.

Positions in The Church were bought and sold, so that the buyers could gain more power and income. Several Popes simply appointed friends and relatives.  One Pope made Bishops of two young nephews who had absolutely no religious training.  Indulgences were handed out like Halloween candy.  If you gave The Church enough gold, you could commit any act, and still go to Heaven.

I’ve run into most of this information piecemeal, but it was both pleasant and disturbing to see it all laid out in an all-you-can-sin buffet. The religiously-naive would be horrified to see the quiet, historical listings of all the mistakes of the ‘Infallible’ Popes, the changes in the ‘unchanging’ Catholic Church, and the gamut of sins of all the ‘Holy, Sanctified’ religious leaders.

Until this time, many rulers, both religious and nobility, were illiterate and ignorant – and proud of it. Peasants knew only what they were told. Even the elite were only vaguely aware of occurrences at any distance, and days, weeks, months after they occurred.  After Gutenberg perfected the printing press, more people learned to read, and knowledge began flowing – the beginning of the end for the Church’s control.

The Church had invented Purgatory as an extortion racket. It all came to a head when one Pope wanted money to wage yet another war.  The selling-indulgences scheme had folded faster than a Kardashian at a spelling bee, so the Pope announced that, for those who ‘donated’ enough gold, time spent in purgatory by relatives could be reduced or eliminated by his prayers.

The now widely-read Martin Luther published a tract questioning if that were true, and asking why the Pope wouldn’t do so merely for the sake of supposedly good Christian souls and their obedient kin still here on Earth, and not for the money, “like some brazen harlot”.

While it could still use some updating and improvement, the Catholic Church is a thousand times better today than it was five hundred years ago. If you’d like a look at a time when peasants were regarded as worth less than the animals they kept, and society was run to wretched excess by hypocritical, entitled rulers, both secular and religious, this would be an enlightening book.   😯

A highway patrolman pulled alongside a speeding car on the freeway. Glancing at the car, he was astounded to see that the blonde behind the wheel was knitting!

Realizing that she was oblivious to his flashing lights and siren, the trooper cranked down his window, turned on his bullhorn and yelled, “PULL OVER!”

Paul Mitchell, 29, was walking home from a friend’s Halloween party earlier this year when he found himself next to his neighbor’s pumpkin field.  He had always joked in his mind about how the inside of pumpkins are soft, mushy, and warm (in Texas). So he took out his knife, cut a hole in his choice pumpkin, and began fucking it.

An officer of the City Police Dept. saw Mitchell and stopped to see what was going on. “I expected Mitchell to be urinating in the field and possibly be intoxicated,” said the Officer. Mitchell didn’t hear or see the Officer as she approached, due to his newfound hobby. She shined her flashlight on Paul and said, “Sir, do you realize that you are screwing a pumpkin?”

The local vicar is having a bath, and he’s a little bored, so he decides to, ‘pleasure’ himself. He’s quite happily tugging away, reaches the old moment of bliss, and opens his eyes only to see, at the window, the window cleaner, jaw agape at what he’s just seen.

A couple of minutes later, the doorbell rings, it’s the window cleaner.  The vicar is understandably embarrassed, and asks the man how much he owes him.  “50 quid” comes the reply.  “50 quid ?!?” says the vicar, startled.  “Yep, fifty quid or I tell the whole parish about what I saw, you perv.”

So the vicar hands over the cash, and the cleaner gets on his way.

The following week, the bishop’s ’round for his supper and is having a wander ’round the vicar’s house, admiring his lovely home.  He says to the vicar, “Lovely clean windows you’ve got there vicar, who does them for you?”

“Oh, a guy from the village does them for me, he does a great job,” replies the vicar.

The history teacher announced that the students who could tell her the source of the following famous quotes would be allowed to go home early.

“The first quote is: ‘Four score and seven years ago…'”

“Very good Cathy, you may go home,” said the teacher. “The next quote is ‘Give me liberty or give me…”

Jane raised her hand and blurted out “Patrick Henry.”

Meanwhile a boy had his hand up in the back of the room the whole time and the teacher never acknowledged him, and she said that would be all for the day. She proceeded to write something on the board when the boy said “Stupid Bitches, if it weren’t for them none of this ever would’ve happened”

The teacher turned around and said, “Who said that?”

The boy blurted out “Bill Clinton, now can I go home!”

Did you hear about the accident at the army base?

A jeep ran over a box of popcorn & killed 2 kernels