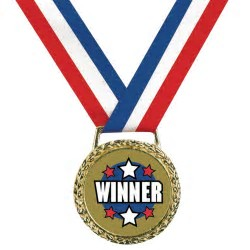 The Procrastinators Unanimous meeting was postponed, so I thought that I’d publish this post instead. Above is a picture of the medal that I got for coming in first – actually, last – in procrastination.  I was going to show it to you earlier, but I just never got around to it.  Right now, I’m doing something I like to call ‘synchronized procrastinating.’  Or maybe it’s simultaneous procrastinating.  It’s a real art form.  You have to want to not bother doing two different things at the same time.

The line in red above, just proves what a master of it that I really am. This was below the above title, of the second blog-post that I ever read, six years ago, before I even had my own blog-site.  It wasn’t until I’d published 825 posts, and was looking around, desperately, for inspiration for another theme, that I finally got around to using it.

And that’s not even my longest-time record for putting things off. I have un-performed household chores that go back decades.  I am the Superhero of procrastination.  I think that I’m from the same high-gravity planet that Superman is from, because several people have told me that I’m very dense.

One thing I do, so that I fail to accomplish, is to apply my industrial-grade forgettery – and I don’t even have to fake it. Oh, was I supposed to pick up that steak that was on sale, for supper?? I’ll thaw some wieners and we’ll have hot dogs instead.  😳

After only two and a half years, I did finally get around to mounting the lovely rapier that my grandson bought me for Fathers’ Day, on the wall.

I don’t sweat the small stuff, and unless there’s a loan-shark threatening to smash both my kneecaps, it’s all small stuff.  I decline to take any of the wife’s ‘honey-do’ list items seriously.  The karma nicely balances out, because she takes them all seriously – until she finds that they’re not.  That happens often enough to justify faking it ‘till she changes course.

I sit beside the big living room picture window, to read. The wife sits across the room.  There is a large window at the top of the stairs behind her, and during the day, the sun shines down through the open rail – but at night….  Her eyesight, like mine, is becoming less acute.

She has a table lamp to her left, and a floor lamp, 4 feet to her right. Recently, I was told to bring up the swag-lamp from the basement, and hang it directly above her chair.  This was the swag-lamp that neither the son nor I wanted down there, the one whose chain had to be hooked tight to the ceiling, or it would garrote anyone going to the kitty-litter tray, or the utility room.

I ignored considered her request for a week – and she moved the floor-lamp 2 feet closer to her chair.  It still wasn’t bright enough, so she still wanted the swag-lamp moved.  I ignored considered it for another week.  We were at the hardware store for something else, when she thought of replacing the 60 watt CFL bulb in the floor-lamp, with a new-style, 100 watt LED bulb.  I have seen the light….and so has she!

Screwed one bulb out. Screwed the new one in. I’m very competent at screwing around.  That I can handle.  Problem solved.  I got to sit on my laurels hands computer chair, and compose this post.  I should be back with another post in a couple of days – if I don’t get distracted.  I do have other things to do.