When is a door not a door??  When it’s ajar.  When is an obsession not an obsession??  Are we obsessed if we always do the same things the same way, or is it that, through observation and practice, we have found the best way??  I’m not stubborn.  My way is just right.

Even if we don’t have to seek professional help, most of us have a thing or few that we’re a bit obsessive about.  My father was obsessive about putting butter on bread: actually, about NOT putting butter on bread.  Somehow it disturbed him to have a bit of unused butter on his knife when his bread was covered.  He hated to have to scrape the excess off against the edge of the butter dish.  It could take him 3 or 4 tiny little diminishing dabs, to complete his task.

Since the wife’s life centers around food and cooking, so do her obsessions.  We own 3 butter knives, another household item not common in our social/financial neighborhood.  She uses one to add dabs of margarine to a casserole of scalloped potatoes, as she assembles it, or to spread pâté on rolls or crackers….  because, apparently, a kitchen knife won’t do it.

As a teen, an older sister impressed upon her that, “All dishes have to be washed in a sinkful of hot, soapy water.”  Not a bad idea on its own, but – we own 4 or 5 sets of measuring spoons.  If a recipe calls for a tablespoon of sugar, a teaspoon of salt, and a half-teaspoon of cinnamon, she measures out the tablespoon of sugar.  Sugar doesn’t stick to slick, stainless steel spoons.  If it did, I would wipe off an offending grain or two with a dishcloth.  The other size spoons aren’t used but, she throws the entire set into the sink, to be washed.

I remember the first time she caught observed me cleaning out a saucepan of reheated chilli and eating with a spatula.  We don’t do that at our house.

She ‘translated’ cooking instructions for a rice maker, from Imperial, to Metric, and came up with the weight of rice at 389 grams.  I obsess about that ’messy’ looking number, and use a nice, round, 390 grams without ever telling her.  It’s almost as bad as the swishy little women’s section editor in our paper, who published instructions to chill something down to the freezing mark, 0 degrees Celsius….or 33 degrees Fahrenheit.  I obsessively called him and asked how in Hell he’d got 33 degrees.  He just figured it out with his calculator.

My obsessions center around the English language, and word usage.  If you’ve read any of my word posts, like last year’s rant, you know how I like to poke fun at lazy, stupid, unthinking misusages, especially by professionals.  Things like the headline, “Pope considers taking “leave.”  Taking “leave,” is a Lieutenant-Colonel with 30-days of R&R – a temporary absence.  What they meant to punctuate was, “Pope considers “taking leave,” as in, a resignation, a retirement, a permanent giving up of the post of Pope, the way that Benny The Dick wisely did.

The headline writer took leave of his education and training.  I don’t want you to take leave of this site.  See you back here soon??  Please!  🙂

All opinions expressed in this blog-post are not of the management, but solely those of the author…and, in MY opinion, the Word Of the Week

is arty, and pretentious.

I was thrilled to find it, although less thrilled to find that I was not already aware of it.  I was correct to deduce that it was the adjective version of the noun ‘Temerity’, which means audacity, effrontery, foolhardiness, reckless boldness, or rashness.

Without really thinking about it, (Oh, Damn!) I always assumed (making an ASS out of U and ME) that the adjective form would be ‘temeritous,’ but never had the need or occasion to use it.   I was not disturbed to see it used by a newspaper advice columnist.  Lord knows, I only have a Grade 12 education.  This lady may have a string of letters behind her name.

Eleven letters and five syllables in it, I was disturbed to see it used by a newspaper advice columnist, for people whose largest piece of vocabulary might be ‘Wal-Mart.’

I always advise to write to the level of the anticipated readership.  If I had to go and look this up, I’m sure that there was a passel of confused John Deere drivers.

Now that I’ve entrusted this ostentatious, mostly useless, $8.47 word to you, try to be careful with it.  Please keep out of the reach vocabulary of children.  Perhaps reserve it only for TED discussions.

As my Father used to say, before they changed the name of the country to Ethiopia, ‘Abyssinia’ later.  😉

This guy has four daughters who all live at home.
One Friday night the doorbell rings. The guy
answers it and a kid standing there says ‘Hi, I’m
Freddy. I’m here to pick up Betty. We’re gonna go
eat spaghetti. Is she ready?’

The man, mildly amused calls down his daughter
and the two leave.

A few minutes later the doorbell rings again and
he answers. A kid standing there says ‘Hi, I’m
Jim. I’m here to see Kim. We’re gonna go for a
swim. Can I come in?’

The guy, now perplexed, says yes and the two take off.

A few minutes later the doorbell rings and again
the father answers. A kid standing there says
‘Hi, I’m Joe. I’m here to pick up Flo. We’re
gonna go to the show. Can she go?’

The man, now kind of annoyed, says yes and the two depart.

Sure enough, a few minutes later the door rings
and the father answers. A kid standing there
says ‘Hi, I’m Chuck..’

The father shot him.

A young fellow was about to be married and was
asking his grandfather about sex. He asked how
often you should have it. His grandfather told
him that when you first get married, you want
it all the time…and maybe do it several times a day.

Later on, sex tapers off and you have it once a
week or so. Then as you get older, you have sex
maybe once a month. When you get really old, you
are lucky to have it once a year…..maybe on
your anniversary.

The young fellow then asked his grandfather, “Well
how about you and Grandma now?” His grandfather
replied, “Oh, we just have oral sex now.”

A man is driving home late one afternoon, and he
is driving above the speed limit. He notices a
police car with its red lights on in his rear-view
mirror. He thinks “I can out-run this guy,” so he
floors it and the race is on.

He pulls over to the curb. The police officer
gets out of his cruiser and approaches the car.
He leans down and says, “Listen mister, I’ve
had a really lousy day, and I just want to go
home. Give me a good excuse and I will let you
go!”

The man thinks for a moment and says…”Three
weeks ago my wife ran off with a police officer.
When I saw your cruiser in my rear view mirror, I
thought you were that officer and you were trying
to give her back.”

Fathers’ Day is just past, and I would be remiss if I didn’t describe mine, not for me, but to spotlight some young-uns.  I’ve been a father for a long time.  Hell, I’ve been everything I am or was, for a long time.  I don’t get too worked up about birthdays or Christmas or Fathers’ Day.  The wife will shove a hot poker up my ass if I forget her birthday, or our anniversary, but otherwise, meh!

Since the son is almost as sentimental as me, (Remember that first part!  It’s SENTImental, not just mental) his Fathers’ Day present was a guided tour of Kings’ Buffet Chinese Restaurant.  It was also his Mothers’ Day present to the wife – kill two birds with one obesity stone.  He also picked out and purchased about $30 worth of gorgeous cholesterol beef tenderloin, from which we cut three thick, beautiful filets, and two small roasts for later.  The way to a man’s heart is through his stomach, and I have an 8-lane super-highway, complete with on-ramps.

My darling daughter, LadyRyl chose to enhance my coin collection.  When she and the grandson came over on Fathers’ Day, she presented me with a Presentation Grade, 1986, Canadian Dollar coin.  This is different from the simple, bronze-colored, Loonie coin in general circulation.  These used to be ‘Silver Dollars’ but are now Nickel, and silver in color only.  This one commemorates 100 years of coast-to-coast railroad in Canada.

The coin came safely snuggled in a plastic holder, inside a black holding case with a gold panda embossed on the top.  It has never been touched by human hands – cotton inspectors’ gloves, but never oily skin.  The finish is immaculate.  Certain areas have a mirror polish.  Truly an impressive coin, and a tribute to a vanishing technology.  I just can’t imagine one with a semi big-rig on it.

Now we come to the grandson – the 6’ 2” little scamp.  (Fortunately) abandoned by his father before he was born, the son and I have tried to support and guide him through life as best we can.  We may have helped his mother do something right, because he has grown up to be a super young man.

He handed his uncle a $100 gift card to the Chapters Bookstore chain.  Knowing the son’s reading habits, that might last till the middle of July.  For something to munch on while he’s reading, he also gave him about two quarts of party mix snack, from the bulk food store.

He brought with him, a cardboard box, about 4” square, and almost 4 feet long.  Being a little slow on the uptake, I wondered what it was. He brought it over to me, slit open the seal on one end and handed it to me.  ‘Hmmm, doesn’t weigh much.’  And the dénouement began.

Of all the weapons I’m interested in, I’ve wanted a rapier for display for years – and that’s what slid out of the box.  This thing is fully functional.  I could engage in SCA (Society for Creative Anachronisms) fencing tournaments, but like the Dollar coin above, I don’t want to ruin some polished surfaces. 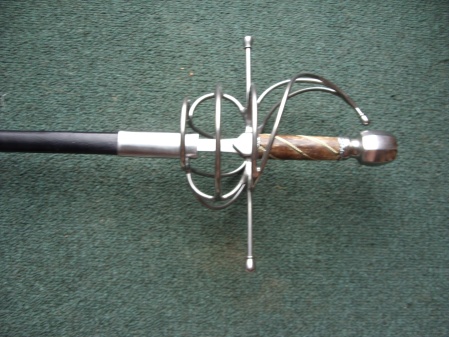 It has a 39” long, diamond profile blade, with no sharp edges.  This is a stabbing weapon.  It weighs 2-½ pounds.  Movies aside, real sword fights didn’t last all that long.  Your arm would tire quickly.  Interest in rapiers must be cycling/dying down.  A few years ago, it would have been possible to also purchase a matching ‘main gauche’, a left hand parrying knife – but no longer.

I am fascinated by the shiny, beautiful, swirling, interlaced-rod guard, developed over years of experience to protect the hand.  It has a heavy pommel to counterbalance the heft of the sword, and for punching or head-bashing, in close.  The handle is bone, perhaps giraffe, from Africa, spiral grooved and inlaid with twisted gold(-plated brass) wires, for solid grip.  At each end of the bone handle is an assembly ring which is engraved with flowers.

I have cast my bread upon the waters, and it has been returned to me seven-fold.  I have the love of my daughter – and an impressive coin, and I have an upstanding, generous grandson – and a mesmerising rapier.  I have displayed (pictures of) the sword on my blog site.  Now I have to find a place to display the real thing, proudly in my home – and stop waving it around, knocking over the lamp, and (gently) poking the dog.  Baseball bat?  Shit!  Now I’m waiting for the first stupid burglar.   😳