I have been ‘Grand’ for decades, but I just found out that I’ll soon be getting a promotion to ‘Great.’

After getting everyone’s forehead blasted with a phaser infrared thermometer, we had the daughter, and her son and wife over for a long overdue, COVID-prevented family meal and visit.

The grandson and his wife provided the dessert – warm, soft, deep-dish brownies, with either French Vanilla ice cream, or coconut-flavored whipped cream.  Before they brought that out, they served up something much sweeter.  They had news that they’d held for almost four months, until they were sure, and had the chance to reveal it to the two older generations, all at the same time.  They are pregnant (Well, she is.) with their first.

The Grandson married a bonnie lass with a good Scottish heritage.  She doesn’t so much have a bun in the oven, as a solid serving of haggis.  Here is an image of their wee bairn, a Scotch egg, building up power to burst forth and amaze the world, as the first in the next generation of the NSFW Clan.

The kilt is still a bit long.  It will be a few more months before we know whether we will get a bagpiper or a Scottish dancer.  You just know that I will keep you informed.

The wife says that she is willing to start being called Gigi – GG – Great-Grandmother.  I think I’ll just stick with Archon, or G.O.D.   😀  😀 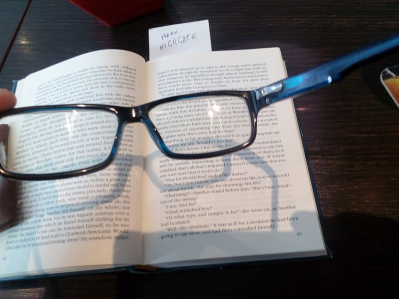 Bobby’s mother said, ”You want to be what?”

Well, the long word meant, ‘using long words’, and the short one meant, ‘learned or scholarly.’ “Why?”

“I want to impress people.”

She replied, “Your grandmother used to say, ‘Don’t get above your raisin.’ ” She almost smiled at his puzzlement. She hadn’t understood it when she was 16, either. “The word is actually raising. It means, ‘Don’t put on phony airs’. People will like you if you are honest and real. You have to study to get big words. You can’t just find them with a magnifying glass.

Lord, it’d been five years, and she still missed her Grandma.  She had loved Grandma, and Grandma had loved her, and all the other grandkids.

Grandma’s love had seemed to be wrapped in food – homemade candy and cookies, turkey and stuffing and gravy – all the good stuff.  These were the last of her carefully rationed jars of Grandma’s dill pickles.  If only she’d thought to get Grandma to teach her how to make them.

She could buy pickles at the store, but none tasted as good, and certainly none of them held the care and love that Grandma put in.

Grandma had the best legs in town. (That didn’t sound creepy or perverted, did it?)

I asked her one time how she kept them so trim and muscular. With nine kids, she saved money by making clothes on the old, treadle sewing machine.

Grandpa saved, and finally bought her an electric model. The first time the power failed, the old antique got lugged back down from the attic.  “Besides,” grandma explained, “that wimpy little motor can’t handle leather or denim.  How do you think I got the most gorgeous gams?”

Grandpa just grinned.
I think I need some brain bleach.

In Great-Grampapa Bollini’s village in Italy, everyone grew much of their own food. In the mountain passes north of Milan, every available square metre was treasured and planted with vegetables and fruit.

When he came to America, he declared, “Food is for the belly, but the soul needs feeding too.” He manages to grow grapes, as well as zucchini and beans, but beside the driveway out front, his daffodils trumpet the coming of spring, and urge the tulips to rise from the warming ground and spread their beauty for his eyes and ours.

Our souls rejoice when we visit him.

This guy has four daughters who all live at home.
One Friday night the doorbell rings. The guy
answers it and a kid standing there says ‘Hi, I’m
Freddy. I’m here to pick up Betty. We’re gonna go
eat spaghetti. Is she ready?’

The man, mildly amused calls down his daughter
and the two leave.

A few minutes later the doorbell rings again and
he answers. A kid standing there says ‘Hi, I’m
Jim. I’m here to see Kim. We’re gonna go for a
swim. Can I come in?’

The guy, now perplexed, says yes and the two take off.

A few minutes later the doorbell rings and again
the father answers. A kid standing there says
‘Hi, I’m Joe. I’m here to pick up Flo. We’re
gonna go to the show. Can she go?’

The man, now kind of annoyed, says yes and the two depart.

Sure enough, a few minutes later the door rings
and the father answers. A kid standing there
says ‘Hi, I’m Chuck..’

The father shot him.

A young fellow was about to be married and was
asking his grandfather about sex. He asked how
often you should have it. His grandfather told
him that when you first get married, you want
it all the time…and maybe do it several times a day.

Later on, sex tapers off and you have it once a
week or so. Then as you get older, you have sex
maybe once a month. When you get really old, you
are lucky to have it once a year…..maybe on
your anniversary.

The young fellow then asked his grandfather, “Well
how about you and Grandma now?” His grandfather
replied, “Oh, we just have oral sex now.”

A man is driving home late one afternoon, and he
is driving above the speed limit. He notices a
police car with its red lights on in his rear-view
mirror. He thinks “I can out-run this guy,” so he
floors it and the race is on.

He pulls over to the curb. The police officer
gets out of his cruiser and approaches the car.
He leans down and says, “Listen mister, I’ve
had a really lousy day, and I just want to go
home. Give me a good excuse and I will let you
go!”

The man thinks for a moment and says…”Three
weeks ago my wife ran off with a police officer.
When I saw your cruiser in my rear view mirror, I
thought you were that officer and you were trying
to give her back.”

As a little girl, Alice had enjoyed visiting her grandparents. She often spent time in the old storage shed behind their house. Her path to the back was blocked by the swivel frame of a mirror-stand.

When she was 13, she realized she could access the rear simply by stepping through the empty oval. She found a set of shelves with colored bottles and vials. A sign on one said, “Eat me”. Another was labeled, “Drink me.” Others said, “Snort me,” and “Smoke me.” She obeyed them all.

“And that,” she told the rehab psychiatrist, “is how I got addicted.”