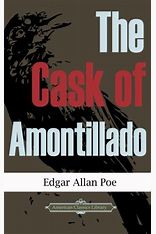 How do you get a guy to stand in a closet, while you seal him in by bricking up the door??

Strictly a hypothetical question!  That odd-shaped portion on my basement wall is where the electrical panel used to be…. and I have no idea where that irritating neighbor got to.

And Google is no damned help.  I hate that auto-complete!  I type in How do you…. and I get back
….do the Hokey-Pokey?
….get picked up at a gay bar?
….serve curried Iguana?

I believe I found the birth of Woke, and it’s further back than you might think.  I woke from a refreshing afternoon nap, wondering how the narrator in Poe’s The Cask of Amontillado, kept his victim from just breaking out.  It turns out that he chained the loathed sot to the back wall, tightly enough so that he could not get loose.

I studied the tale in Grade 12 English – old enough to deal with some of the darker themes.  Living out in the boondocks, the teacher only explained a bit of the story motivation, and being an Anglophone-Canadian, managed to mispronounce the Spanish name.  He spoke ah-mon-tee-yad-oh like ah-mon-till-lay-doh.

I re-read the tale on the Internet recently, and was discussing it with the son.  Poe’s works have always been classified as horror.  That’s how my teacher presented it.  Like Romeo and Juliet, this was a valid story of Renaissance, upper-class hatred and competition between families and commercial groups – possible, even likely to happen, given the opportunity.

The son said that, when he studied it, approximately 1988, his (female) English teacher explained that it was all allegory.  The story-teller was just an alcoholic, who was symbolically imprisoning his weakness, and getting sober.  So I guess, no AA back then??!  The dark horror story had been changed into a bright, kind, redemptive one of rehabilitation and personal triumph.

Personally, I find that interpretation to be ridiculous, but I wonder if any of you were presented with it.  😕   😳

If you want to try this, go to Rochelle’s Addicted to Purple blog, look at the weekly picture, and write a 100 word story about it.

I awoke with the sun in my eyes and covered in blood. I quickly rose and stared into the little woodlot.

Even with the gnarled stumps and trunks, it looked innocent, friendly, even inviting, so unlike last night when we had laughingly decided to take a shortcut to the party through Corpse Copse.

After what had seemed like – must have been – hours of tripping roots and grasping, slashing branches, I stumbled out, exhausted, and fell to the ground. What had happened to Bobbie?! Had she made it? What would I tell her parents? Worse, what would I tell the Police?