Just over two years ago, I wrote a Coming Home piece about how my old auto-parts plant was being given a cosmetic makeover.  An engineering firm was ready to move in, and an electronics firm was considering renting space.

Google had set up in a nearby, refurbished, gentrified tannery building, steadily increasing their local presence till they occupied the entire top floor, but was looking for still more room, and was considering a move to my old plant.

‘Considering’ is over, and money is being spent.  Not satisfied with mere lipstick and eye shadow, they are paying for a pair of implants.  On top of the three-storey section where I used to make Jeep parts, they are installing a partial two storey addition, set at a rakish, artistic angle.  They plan to occupy this entire ‘new’ (1956) end, as well as the complete top floor of the older 1906 brick section. 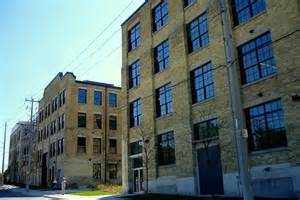 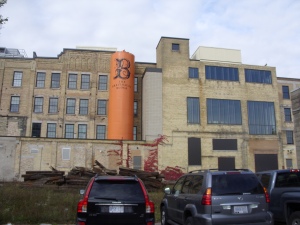 It fronts on a street named for a German pioneer, Henry Breithaupt (brite-up), so it’s now called the Breithaupt Block, 200 feet wide and a block long.  The tank which was white, and held vinyl chips when I worked there, has been painted Gawdawful Orange, and now probably holds enough Starbucks coffee to fuel all the offices.  Note the gorgeous new (expensive) Thermo-pane windows.

Nothing is too good for Google employees.  They will have a spa, a gym, a nap/rest/reading room, several lunch rooms, c/w microwaves, stoves and refrigerators, and a staff of fulltime cooks in a cafeteria.

I have taken, and lifted, several pictures for those few who are interested, showing then, now, and near future, above.  The second photo below, shows the deteriorating brick facing and cracked windows.  During several really cold spells over the years, we would come in, to a couple of rented, jet-engine-type propane heaters on each floor.  Other photos show the facings stripped off, and the new upper floors, getting ready for a new look, taken from several angles. 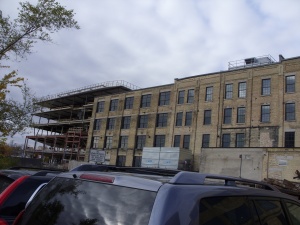 Old Girl with her clothes on.

Stripping down to essentials.

Standing on the shoulders of giants. 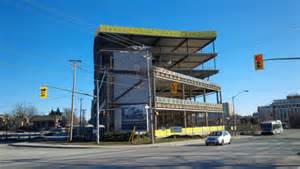 End-on from the main drag.

The strange angle is because the side street doesn’t meet the main one at 90 degrees.  The bus is crossing railroad tracks, and the road is currently being dug up to lay tracks for the new LRT.

This is all located right beside the upcoming bus/train/LRT transit hub, and just at the edge of the Technology Circle, envisioned, promoted and coming to fruition in the core of Kitchener, Ontario.

The old girl looked pretty good when I visited her a couple of years ago.  These new additions and improvements proceed apace.  She’s looking so much better and more functional now, and may be open for Google business by the time I publish this post.