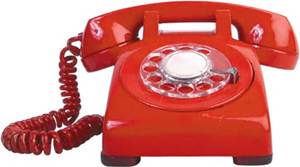 Once upon a time, there was a simple and little Hindu priest who lived in Mathura, India. One time he had the chance to go visit the Pope at the Vatican in Italy. After traveling to the Vatican, he walked up the steps and through the halls of the opulent building where the Pope stayed. He looked in awe at the beautiful marble floors and majestic columns.

Then he came into the Pope’s office and greeted the Pope who was seated behind his desk. The little Hindu priest sat nearby and they exchanged pleasantries. Then he noticed a red phone sitting at the end of the desk, so he asked what it was.

“Oh, that’s my hotline to God,” replied the Pope. “Whenever things get too difficult and I need to have a personal talk with God, I give Him a call.” “Oh,” said the priest. “Would you mind if I tried it?” “No, not at all,” the Pope responded.

So the little Hindu priest picked up the phone, dialed the number, and sure enough, he got through to God. He offered his respects and prayers, said he was very happy to talk to Him, and then hung up the phone after only five minutes.

He was a simple priest and did not have much more to say to God. He then thanked the Pope for the privilege of using the special red phone. The Pope replied, “Oh that is quite all right. By the way, that will be €75.”

“Seventy-five Euros?” inquired the Hindu priest. “Oh yes,” said the Pope. “For long distance charges. It’s a long way from here to God, you know.” So the priest pulled out his wallet and gave the Pope the seventy-five Euros.

Several months later, the Pope had the opportunity to visit India, and it was arranged for him to come to Mathura and visit the little Hindu priest. So the Pope approached the little hut of the Hindu priest, ducking his head as he walked through the door. He sat in a chair in front of the little table where the Hindu priest was pleased to again meet the Pope.

They exchanged greetings, when the Pope noticed the same kind of red phone on the priest’s table as he had at the Vatican. So the Pope asked what that was. “Why, I also have a hotline to God,” replied the Hindu priest. “Do you mind if I use it?” asked the Pope. “I really have a lot on my mind.” “Please do,” responded the priest.

So the Pope got on the phone and got a good connection and managed to get through to God. He offered his prayers, but then had many things to discuss. He talked about the trouble in the Vatican, the difficulties with the priests and legal charges in the United States, the changing attitudes of the congregation in England and Europe, and so on. Fifteen minutes went by, then a half-hour, then finally, after nearly an hour, he was able to put the phone down.

Then he said, “Thank you very much. I feel a lot better now. I had so much to talk about. By the way, how much will that be?” The Hindu priest thought a moment and then said, “Two rupees.” “What,” the Pope replied, surprised at how inexpensive it was. “Why so cheap?” “Why don’t you know?” asked the little Hindu priest. “Here it is a local call.” 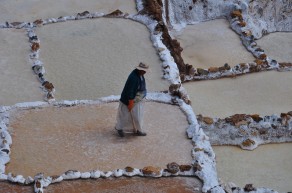 Take It With A Grain Of Salt

For almost a century, the self-righteous British Raj ran the sub-continent for the financial benefit of The British East India Company. Each year, the rules became stricter, and more numerous.

Now they were told that they could not go to their ocean, and use their sunshine to evaporate the water.  They could no longer “make salt.”

Their leader, the Mahatma, told them that they must non-violently insist on their centuries-old rights. Men were beaten and imprisoned.  Bones were broken, and people died. Still the people quietly rose, like the tide itself.

And so, the great Gandhi gave birth to India.

Go to Rochelle’s Addicted to Purple site, and use her Wednesday picture as a prompt to write a complete story.