I was born and raised in a small town.
How small, you say? I’m glad you asked.

You had to step out of the village limits in order to change your mind.

The nickname for the city jail is amoeba because it only has one cell.

McDonalds only has one Golden Arch and the nearest one is 15 miles away.

The New Year’s baby was born in April.

The “Welcome To” and “Thanks for Visiting “signs are front and back of the same sign.

You have to go to the next town to find 2nd Street….

A “Night on the Town” only takes about ten minutes.

The Subway restaurant that serves foot-long sandwiches cannot fit within the village limits.

You do not bother using turn signals because everyone already knows where you are going.

Big social events are scheduled around when the high school gym floor is being varnished.

You call a wrong number and the person who answers can give you the correct number for the person you are trying to call..

There is no point in high-school reunions because everyone knows what everyone else is doing anyway.

It was cool to date someone from a different high-school.

The golf course had only three holes.

Anyone you are looking for can be found at either the Dairy Queen or Wal-Mart, over in ‘The Big City’.

Directions are given using the one and only stop light as a reference – after they finally installed one.

Weekend excitement involves a trip to the grocery store.

Your teachers remember when they taught your parents.

The best burgers in town are at the four-lane bowling alley.

While fairly small, Batavia, NY, which we recently visited, has been historically important. It is a relatively old city.  While Kitchener has a pioneer tower at the outskirts, celebrating the arrival of the first settlers in 1820, the oldest cornerstone I saw in Batavia was 1804, with many others in the 1860s, ‘70s, and ‘80s.

Batavia is celebrating 100 years of being a city.  They have a new(ish) no-nonsense, get-the-job-done City Hall, so much nicer looking than Kitchener’s pretentious, architectural Frankenstein’s monster.

Used to be a Farmers’ Insurance company, now a Charity’s headquarters

The back of the county courthouse, from about 1900. 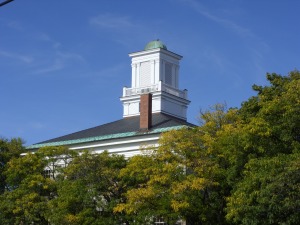 Front/side view of cupola.  I believe the building’s style is ‘Federalist’, solid, trustworthy, about as exciting as mashed potatoes.  This is the first indication of the move forward from the uselessly ornate Victorian Era architecture.

1890 Police station.  The turrets and towers continue down the side street, until it merges with a utilitarian 1980s jail.

When the Cold War warmed up in the mid-’60s, the basement was designated a fallout shelter.

What was once a County Court judge’s magnificent home, half a block from the cop-shop, is now carved up into tiny apartments.  The shingles on the Russian Orthodox Church-style end tower need some uniform replacement.

The side shot shows a front chimney which disappears after it becomes a second-storey fireplace.

A side-street view of the original municipal Fire Department building.  The section on the left c/w alarm bell on the roof, was the Chief’s apartment/home.  Now it houses a crafts and memorabilia store.

The main-street angle shows the round tower on the left, which the firemen climbed to get to the dormitory, with a brass fire pole down the center for fast response.  The square tower on the right end was for hanging hoses to dry so they didn’t rot.

There’s a lovely little downtown park, just up from the old firehall, along the edge of Tonawanda Creek, which ambles through town.  Perhaps they celebrate Disney princesses there, or maybe that’s where gay weddings are held.  The park is named Peace Park.  There are memorials to several pioneers and politicians, as well as veterans.  There was a display of about 20 little American flags around the Veterans’ stone.  The son commented that approximately 1 of every 10 houses also flew a flag.

A little wooden footbridge across the creek into a residential neighborhood.  A close look at the middle right shows a Federal Government authorized and registered sewage outflow.  Imagine how bad it might be if the Government didn’t have it under control.

An upstream view, back toward the park. 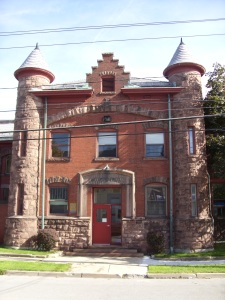 A Catholic Church – every city’s got one (or more).  With the afternoon sun directly behind, the best shot was from the shadow of the tower, in the left-turn lane in the middle of an almost-deserted Sunday street.  The son didn’t trust me to warn him of impending traffic, instead, taking a higher-angle shot from the safety of the sidewalk. 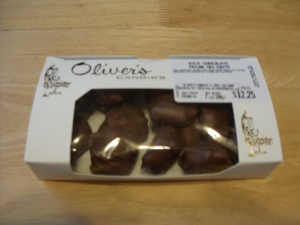 From a candy store at the other end of the main street, a present for the wife, as thanks for allowing us an unescorted jail day-pass.  With a flurry of intellect and originality, Batavia calls their main street, Main Street.  My little British-styled home town called ours, High Street. 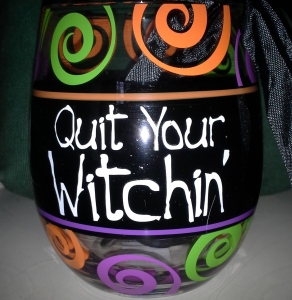 We didn’t know that while we were gone, one of the daughter’s cats had broken her favorite glass, but we used some of grandson WillowThorn’s kind donation, to purchase her another.  The Wiccan Witch of the West loves it.

These were the photo chronicles of a lovely, sunny, warm, Sunday stroll through an historically interesting little village which grew up into a productive city, without losing too much of its heritage.  Next week I tell the tale of our welcome(?) return to Canada.

My wife’s from the Mid-west. Very nice people
there.  Very wholesome.

They use words like ‘Cripes!’  ‘For Cripe’s sake!
Who would that be, Jesus Cripes?  The son of
‘Gosh?’ of the church of ‘Holy Moly’!

I’m not making fun of it. You think I wanna burn
in ‘Heck’?

Old age isn’t bad – when you consider the alternative.

The Lone Ranger and Tonto are riding along when
the Lone Ranger puts up his hand and says,
“Whoa.” He then climbs down from his horse
Silver, walks behind the horse, lifts his tail
and kisses the horse on his asshole. He then
remounts and they ride on.

A little while later, the Lone Ranger again
raises his hand and says, “Whoa.” He dismounts,
lifts the tail and kisses Silver on the ass
again, then remounts.

Tonto, not sure as to what is going on asks,
“Hmph! Kemo Sabe why you get off Silver and kiss
him on asshole?” The Lone Ranger replies,
“Chapped lips.” Tonto then says, “Ugh. That good
for chapped lips?” The Lone ranger replies, “No,
but it keeps you from licking them.”

1:  Use your MasterCard to pay off your Visa.
2:  Pop some popcorn without putting the lid on.
3:  Forget Weight-Watchers, and send yourself a Candygram
4:  Make a list of things to do, that you’ve already done.
5:  Get revenge for tax woes by filling out your forms in Roman numerals.
6:  Tattoo “Out to lunch” on your forehead.
7:  Leaf through a National Geographic, and draw underwear on all the natives.
8:  Go shopping!  Buy everything!  Sweat in it!  Return it the next day.
9:  Drive to work in reverse.
10:  Read the dictionary upside-down and look for secret messages.
11:  Bill your doctor for the time spent in his waiting room.
12:  Write a short story using alphabet soup.
13:  Stare at people through the tines of a fork and pretend they’re in jail.
14:  Make up a language and ask for directions.

I know some of you may have already used one or more of these sanity-saving stress reducers.  Feel free to try the rest, before you wind up like this guy.

Title Yard Sale – Read the following short story, and then pick the title you feel best applies.  No extra charge.

SAME SEX MARRIAGE??!  Over my dead body – better still, over theirs.

These filthy fags parading around – “I have a job.  I pay taxes. I want the same civil rights as everybody else.”  They’re worse than the niggers and Jews.  Niggers are just weak-minded jungle bunnies.  They don’t know no better.  The Jews may be Christ-killing heathens – but these perverts are sinners.

Civil rights??  I say cut their junk off and throw them all in jail.

Here we are at the church.  Take a look at the sign Bobby.  What’s Reverend Larkin’s sermon theme today?  “Love One Another.”  Awww – that’s nice.