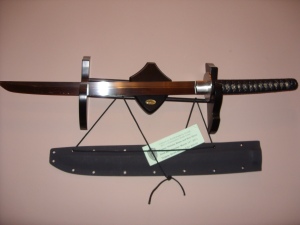 On Saturday, Aug. 23, the son, grandson and I attended another Art Knife Show at a fancy hotel in downtown Toronto. We took along with us, the Katana sword shown above, which the son won in a door-prize raffle in 2011. Tickets were $5/ea, or 5 for $20. The son risked the twenty bucks, and the lady at the door gave him six tickets. Being honest, he returned the extra ticket, and insists that it was the karma from this act which won him the sword.

We carefully wrapped it in a large towel, so that it could ride the subway with us, incognito. It was a collaboration effort. One skilled bladesmith created the blade, and then handed it over to another maker, more skilled in adding the fittings – handle, guard, wrap, and sheath – and assembling the final product.

While finished, at the show, it took another 10 months for it to be shipped to us. We emailed photos to the blade maker, but he was very interested in actually seeing and handling the finished product. He had to miss the 2012 show. In 2013, the son forgot to bring it, but promised, “Next year in Jerusalem Toronto.” In 2014, we were 60 miles from home when the son finally thought of it. We weren’t going back! This year, finally, the blade guy was overjoyed and impressed, and took several shots of it for his catalogue.

Below are several photos of blades I felt were interesting and well made, along with a few comments. If you have any questions, feel free to ask, and I’ll try to answer. 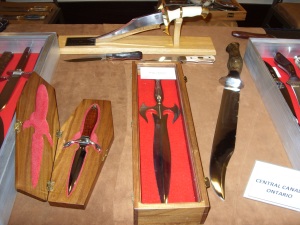 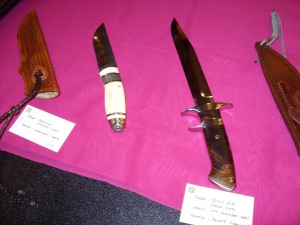 The knife on the right is one version of a sub-hilt fighter.  I paid a maker $700 to produce a cheaper model with a white handle that I could have scrimshawed.  He played around for over two years before deciding that he wanted to make American Civil War replicas.  It took another year, and urging from influential members of the Guild, to get him to return my money.  I’d have been much happier to have the knife instead. 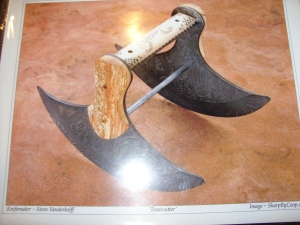 This Damascus double ulu started off as a joke by a maker with a young son who didn’t want to eat the crusts on his toast. 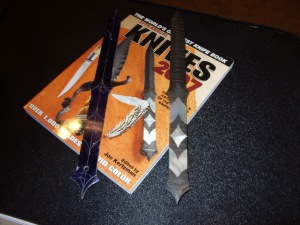 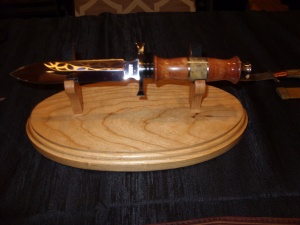 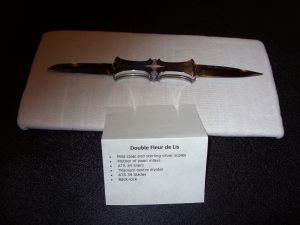 Double-ended jackknives used to be common.  Some cutlery companies still make a few from $20 to $100.  I believe this beauty was going for $850. 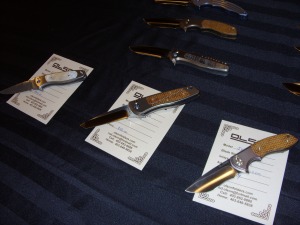 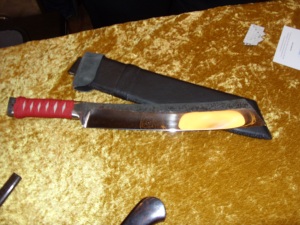 Not quite an ‘art knife’, this hay-bale cutter contained $200 worth of material and labor.  The maker built it for experience and practice.  It was going to a Mennonite in my area in exchange for some Damascus steel that he had made, and a small blower forge. 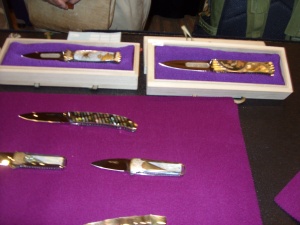 My little digital camera really does not do some of these knives justice.  Click on the photos for more detail. 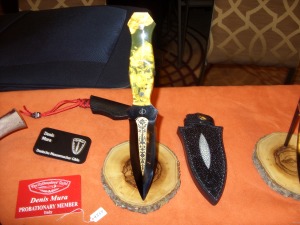 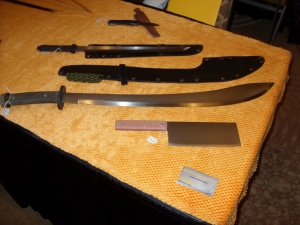 The photos above and below are of knives produced by the maker of the blade of the katana at the top.  Again, my lack of detail does not show the high quality of his blades, but amateurish finish on his handles. 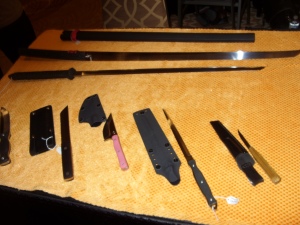 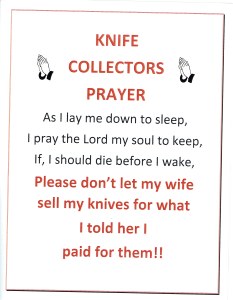 The photo at the top shows a small portion of a collection that the owner of this sign had on display.  The ‘Art Knife Makers’ were all dressed in suits and upscale clothing.  They usually built one knife at a time.  While they charged $500 to $5000 a knife, they often had it sold, and money in hand before it was finished.

This unassuming guy dressed like me – black jeans and a polo shirt, but his display contained dozens of these expensive toys.  I need to ask him next year what he does for a living.  The cost of his collection could buy a small country.

Day 3 – Lost In Thought – And Other Places

The muffler shop manager holding our car for ransom, called early. After trading retirement financial security for a ride back to Canada, we had our treasured transportation back to the motel by 10 AM.  Now we were ready to attend the knife show, at 1 o’clock.

The drive to the knife show was 44 km/26 miles. Halfway there, work crews had two matching bridges down to one lane each.  With the usual assholes rushing up as far as they could, before cutting someone off, by the time we got there, the two-lane, bumper-to-bumper backup on the Interstate was five miles.  By the time we returned from the show, the parking lot was ten miles long. 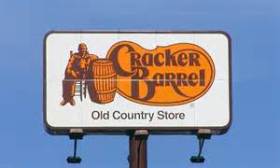 The wife decided that we needed some sustenance before reaching the venue. She had been eyeing Cracker Barrel signs since Erie, PA.  At the exit before ours, there was another one, so, up we went.  Little Miss GPS was not happy.  RECALCULATING!  Turn around. Turn right, now! Get back on the Interstate or I’ll smack you.  We turned her off, and wound up having lunch at Denny’s, saving Cracker Barrel for supper.

Residents either knew exactly where we were from, or couldn’t point to Canada (and maybe even Ohio) on a map. Our server at Denny’s had both her maternal grandparents come from Paisley, a little village of 900, 80 miles north of Kitchener, where my brother lives.  He probably bought their old house.

We had seen TV promos for a movie called Ouija, where the game pointer is inhabited by a malevolent spirit. I didn’t believe in such silliness – until Ethel the evil GPS struck.  Perhaps she was angry because she was ignored, and turned off while we lunched.

When we turned her back on, she quickly got us to the next exit. The ramp comes up to a T-intersection.  My memory from a trip there almost ten years ago, said that we turned right, but Ethel insisted that we turn left, and drive 6.7 km.  Turn left on this highway (?), then turn right on this county road. (It’s a farmer’s lane!)

I knew we were in trouble when we passed under the Interstate, and were south of it.  Turn off the paved road??! We left pavement for gravel road, and ran off gravel onto dirt road.  We finally looped around, right back to where we started, and she insisted that we turn left again. Oh no you don’t! We turned her off, and I turned right.

I drove for several miles, but now I was spooked. I didn’t see the Civic Center.  I did see a gas station, with a State Trooper, so I pulled in and asked him.  I admitted that I was a dumb, lost tourist, and where was this venue?  He leaned to his left, and pointed just past the big tree, around the bend.  Damn!  Damn!  Damn!!  I gotta get these glasses retreaded.

After recovering from our adventure in the wilderness, the knife show was a dismal failure. AFrankAngle didn’t miss a thing.  Apparently the Ohio Knifemakers’ Guild had a little schism, and the clique responsible for advertising and promoting the show, took their toys and went home.

Two of the makers were amazed that I’d even heard of it, in Canada, and drove all the way to attend. One maker packed it in at the end of Friday, and refused to return Saturday.  Only about half the expected displayers showed up, not including any of the fancier makers.

The show was about half-size, and so was the paying-customers crowd(?). There were a few ‘purveyors’ – collectors with a display of other people’s knives they were anxious to unload.  There were a few Suppliers, with grinding wheels, sanding belts, and handle materials – and damned few makers to sell them to.  There was only one ‘rusty jackknife’ display.  One maker was selling para-cord bracelets that his kids had made.  One maker’s wife had added some small knitted items, and etched drinking glasses, to expand the display

There were to have been door-prize draws, every hour, on the hour.  There was one, just as we arrived at 2:20 PM, but I didn’t hear any others before we left, a couple of hours later.  With so few ‘good’ knives, I took only a few photos.  They include a dagger with dyed, stabilized Maple-wood handle, and a couple of shots of a Japanese-style Katana. 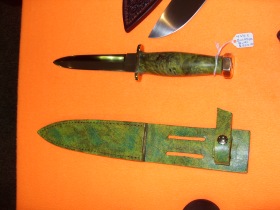 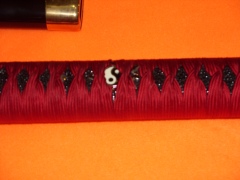 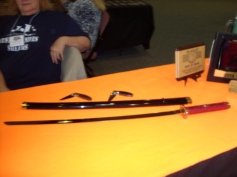 Battle Horse Knives is a production team of a husband, his wife, and a friend. Using production-line methods, they had dozens of well-made, but uninspiring, hunters and skinners, suitable for the local outdoor crowd.

Since the guys work with wood for the handles, they’ve also acquired enough carpentry skills to build an 8 foot long miniature battlement to display their wares. Like my Rapunzel post, they included a tower with hair streaming down.  I thought it might have come from the center of the V-shaped beard on the friend.  The wife told me that it cost her a knife at the Atlanta show, but she got it from a 12-year-old girl attendee – with her parents’ knowledge and permission. 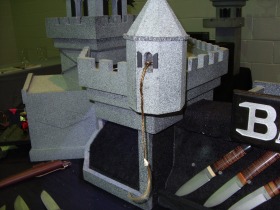 One artisan – not maker – took factory-made knives and removed the handle material, and replaced it with the State stone, Ohio Flint. Cute, but so what?

Back to the motel, a home-style supper at Cracker Barrel, a little shopping at the plaza, and a good night’s sleep to rest up for the Erickson Expedition. Wanna know how it turns out?  You know where the Archon’s Den is!  See you soon.  😀