While stitching up the cut on the hand of a 76 year-old farmer who got his hand caught in the gate while working cattle, the doctor struck up a conversation with him.

Eventually the conversation got around to politicians, and their role as our leaders.

The old farmer said, “Well, as I see it, most of them are ‘post turtles’.”

Not being familiar with the term, the doctor asked him what a ‘post turtle’ was.

The old farmer said, “When you’re driving down a country road, and you come across a fence post with a turtle balanced on top, that’s a ‘post turtle’.”

The old farmer saw the puzzled look on the doctor’s face, so he continued to explain. “You know he didn’t get up there by himself. He doesn’t belong up there. He doesn’t know what to do while he’s up there. He’s elevated above his ability to function, and you wonder what kind of asshole put him up there.

So there are these four men on a cruise ship, a Jamaican, a Russian, a Mexican-American, and an American.

One night these four men are on the deck of the ship.

The American guy walks up to the Jamaican guy, who takes out a huge smack of weed, and some paper and rolls this massive joint.  He lights it up, puts it to his lips, takes one puff and throws it over the side.  The American says “What are you doing?? Do you know how much that stuff in worth stateside?”

He says “Yeah mon, but in Jamaica we got so much of the stuff, it got no value, mon, worthless.”

The American guy walks away, and walks over to the Russian guy.  He takes out a huge bottle of Absolut, takes the cap off, takes a sip and tosses it over the side, into the seas.  The American says “What are you doing?? Do you know how much that stuff in worth in the States?”

He says “Yes but in ‘lussian, we got so much ‘wodka, it got no value.  What you say, i’s worthless.”

So the American turns away.  He then walks up to the Mexican-American.

He throws him overboard.

A group of Arab terrorists burst into the conference room at the Ramada Hotel where the American Bar Association was holding its Annual Convention.  More than a hundred lawyers were taken as hostages.

The terrorist leader announced that, unless their demands were met, they would release one lawyer every hour.

How dare you drive the speed limit when I’m late for something due to my own poor time management skills?

Two guys are drinking in a bar.
They pull out the sandwiches their wives had lovingly prepared, and tuck in. The bartender comes over and says “You can’t eat your own food in here.” so they swapped sandwiches.

I want to write! I want to produce, to compose, to publish, to attain fame and fortune, or at least acknowledgement, acclaim and adoration, to achieve contact and communication with others….  and apparently, so do tons of other folks.

Many people like me, who are productive, but not creative, are always searching for a little sumpin’-sumpin’ in the way of inspiration.  I am not amazed, but perhaps awed, by the number of ‘prompts’ that are available.  Words or phrases are offered, or pictures, to write stories or poems around.

There are 33-word Flash Fiction Challenges, which I stay away from. Hell, I can’t even say hello in 33 words.  There are 50-word, 100-word, and 150-word Challenges to write a complete story.  One somewhat odd challenge is a weekly offering of seven random words, to include as many as possible in a poem or tale.  This is one week’s selection. 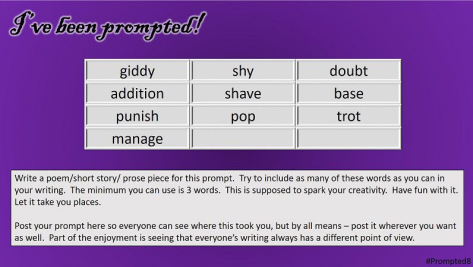 Being, as usual, shy a theme to base a short story on; I was giddy with anticipation, to trot out my writing skills.  I didn’t feel any doubt, and didn’t think that this challenge could punish my compositional abilities.  I was sure that I could manage to publish a bland, uninteresting paragraph or two.

I can write as much or as little as I want. Unlike the 100-word Flash Fiction Challenge, there’s not even a proposed word limit.  Over there, if I run a word or two over, I have to shave a couple off.  If I’m a few short, I just compose an addition, and pop a couple more in.

Fortunately, at least for me, there’s no rule that what I write has to be deep, or socially significant – just use the words.

I try to get a Rochelle 100-word FF each week, and have some WOWs ready for when I’m not successful.  The A to Z Challenge gives me 26 theme opportunities, spread over a year.  I assemble 4 joke posts at a time, and publish them about every two weeks, but I’m always on the lookout for ideas that I can use to tell a ‘Me’ story.

Do any of you use ‘prompts’ to produce posts? Which ones?  Where do you find them?  And do you have any suggestions for me?   😕

Thanks to Piya Singh for this week’s photo prompt

“Bricks are too expensive; I used free fieldstone; it’s much stronger!”

The Big Bad Wolf said, “I’m going to huff and puff, and blow that house down.”

The third Piggy replied, “Not today, bitch!” He stuck a 12-gauge SPAS shotgun out the tiny window and blew the wolf away.

They all lived happily ever after, with their feet on a wolf-skin rug.

I wanted to include a line about, “This State’s got a Stand Your Ground Law.”, but a word limit is a word limit.  You’ll just have to imagine it.  😆

Go to Rochelle’s Addicted to Purple website and use her Wednesday photo as a prompt to write a complete 100 word story.