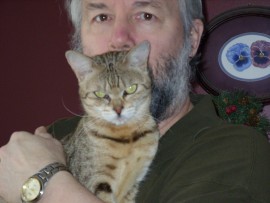 This is where it all begins. No, no, not with the cat!  She’s the intelligent and sane one of this dingbat-ic duo.  This plot was hatched from the depths of Archon’s psychotic psyche.  Once upon a time, he heard that AFrankAngle had driven across a good chunk of Ohio, to visit commenter-supreme and newly-hatched blogger, John Erickson.

Disenchanted with the quality of the Detroit knife show, to use as an excuse to visit the United States, I noticed that there will be a show at the Pritchard-Laughlin Center, in Cambridge, Ohio, in mid-October. Cambridge is in Erickson’s back yard. The wife and I attended two years in a row, some years back, before we knew of the existence of the lost Illinois boy.  Would he accept a visit? Would he (and Mrs. E.) like to visit the three-ended bridge in nearby Zanesville?  Would they like to accompany us to the knife show?

Then came the discovery of Cordelia’s Mom, a new-ish blogger from the Buffalo area. She gave me a blog-award, and I wrote an acceptance post for it.  If I’m going to Ohio, I will want to cross the border at Buffalo.  When Mom heard of this, she was thrilled with the idea of us stopping in for a quick visit.

I titled my humorous (?) post, Sunshine and Lollipops. She commented that I had delivered the sunshine, but where were her lollipops?  I resolved to obtain some lollipops for her, and daughter and fellow blogger, Cordelia, who claims to have called it quits.

I had hoped to have the wife along on this trip, but medical restrictions forced her to direct me to take the son, Shimoniac, along. Just imagine, a father-son/mother-daughter, four-way blog fest.  I had considered continuing over to Cincinnati, with the thought of perhaps taking John E./Mrs. John E. back, for a visit to the Angular blogger if possible.  Aside from “Cincinnati Chili” for me, there is a paddle-wheel boat, Ohio River tour, including under a smaller, but older-brother version of the Brooklyn Bridge, which the wife would have loved.

I even wondered about trying to talk BrainRants into joining us in Cinci, but it was a ten-hour drive from KC, and I don’t think Rants could have got an excuse slip, even to visit the Illi-noisy one. But then came the “Great Move.”  Would it be possible for two or more of us to impinge on Washington, DC, without a Homeland Security raid??! Herding cats??!  This was beginning to look more like juggling cats!  I don’t know how Machiavelli did it.

AFrankAngle has shown some mild curiosity and interest in knife shows, so I have invited him to join us in Cambridge, if John’s medical condition allows visitors and voyages. I don’t know what the final results on any of these options will be as I format this draft.  I will probably have to edit before posting.  It may all fall through, and son and I will just wander a strange country for a few days – if we can even convince the border guards to let us enter on such a flimsy excuse.

This batty idea has been flapping around in my belfry for over a year. Over the past couple of years, we have replaced all the windows in the house, then had the roof re-shingled, and the garage and main entry doors replaced – all on a retiree’s income.  Now the paved driveway is disintegrating, and we have contracted to have it redone.  The wife worried that, as much as I want this trip, perhaps we can’t afford it.

Since I have everything I need or want, or that gift-givers can afford, for my last birthday the grandson, now receiving a decent wage at his welding apprenticeship placement, offered up to $500, toward any knife I wished to buy. What a darling boy!

At my age, it doesn’t make sense to acquire a knife just for display. I’d sooner be able to look at and appreciate many different knives, so we made a deal that he would partially fund this expedition, I would return with many photos and fanciful tales, and he would be given credit.  Ladies and gentlemen, let’s have a big hand for ThornSmith!  (No link because, while he has a handle, he has yet to set up his own blog site.)

Since the son gets to join in on the trip, he’s also offered to help pay for it. I’m pretty sure we can swing it without having to sell junk bonds.  It’ll be fun – even if only part of it works out.  Stop by later for Episode One, to see if Archon learns to control The Force.    😕