THE POWER OF POSITIVE THINKING

He liked to come up here to contemplate. It was nice and quiet, away from the family, the fuss, the TV, the pets and the noise.

He’d just settle back into this big comfortable easy chair, and consider the whichness of the why….

When I works, I works hard.
When I plays, I plays strong.
But when I thinks, I falls asleep.

A couple in Toronto purchased a house with a swimming pool. Since the wife was a qualified swim instructor, she immediately took in young students, three per half-hour session, from 9:00 AM to 4:00 PM, plus her own two young children.

Her neighbor was a young female psychotherapist who took a few clients at her house, as well as studying for her PhD, and soon requested that she only teach in the evenings, and on the weekends. She ignored this request.

The neighbor needed quiet to work and study, and wanted her legally-mandated Peaceful Enjoyment of Property. She was informed that she was violating the 24-hour noise bylaw.  She ignored this also.

Her local city councillor personally came out, to use his tact and diplomacy to negotiate a compromise settlement. She agreed to limit her hours to Noon till 5:00 PM.  The councillor was barely back in his office, when she ignored the compromise, and reverted to all-day, noisy swim times.

The neighbor called Bylaw Enforcement, who came out and told her that she was violating a commercial bylaw which forbid an all-day, outdoor business. She was ordered to immediately Cease and Desist.  She went to City Hall, paid $1000 for a variance, (I pronounce it ‘bribe’) and continued her noisy, all-day sessions.

When she learned that the neighbors had filed a grievance with the OMB – the Ontario Municipal Board – claiming that the variance should be declared invalid, she somehow managed to get the Toronto Sun to publish a half-page story c/w a photo of her and her skating rink swimming pool.

She vehemently asserted that it was the neighbor who continued to insist on getting ‘everything her way or the highway.’ There are none so blind as those who will not see – that they are the problem.  😳 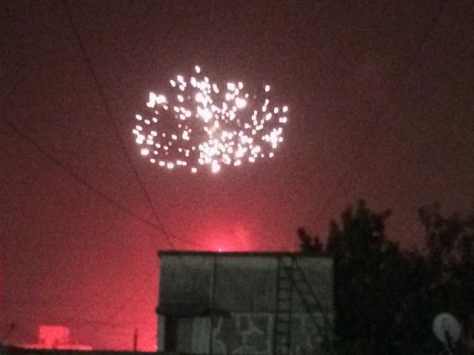 What’s all that noise? What’s going on out there?

I heard on the news that a cop shot another black guy! Black Lives Matter’s got the ‘hood’ worked up.  There’s rioting and protests.

Cool! Let’s go up on the roof to watch.

Look at them all down there! They just broke into Louie’s deli.  Oh, they set that cop car on fire

Don’t go too near the edge. Those guys are throwing things.

I don’t see or hear any guns, and with rocks, they couldn’t hit an elephant at this distan….

Oooohh, look at all the pretty birdies.  ∅∀∗≅

Our ancestors enjoyed silence.  At least I hope they enjoyed it, because every invention they produced – every mechanical and electrical advance they made – has led to the constant thrum of noise that we in the developed world are immersed in.

Our forebears worked their asses off 16 hours a day.  When they finally huddled in their huts and cottages and cabins at the end of a long day, these hovels were not the insulated and breeze-resistant wonders we live in today.

It wasn’t so quiet that they could hear the grass grow.  There would have been the sounds of birds and animals and insects – all hopefully outside.  Then, along came technology, and constant, growing noise.  We have become inured to it, and most of us never even notice it.  It’s just part of our lives.

I had one of ‘those moments’ the other day.  Like the digital clocks and power indicator LEDs spewing light around my house, I became aware of how many things were constantly pumping noise into my ears.  I have four analog clocks spread around my house.  They’re all electric, running on batteries, but they all tick, tick, Tick, Tick!

The son doesn’t want the cats or dog messing with stuff in his room, so he keeps the door closed 24/7.  It could get a little funky in there, so he has set the thermostat so that the circulating fan on the furnace runs on low, constantly.  In the summer when the air conditioning, or in the winter when the burner kicks in, the fan ramps up to high.

In the winter, the air in the house gets so dry that I raise half-inch blue sparks, reaching for doorknobs or light switches, so we have a humidifier pumping moisture (and noise) into the atmosphere.  The mechanical timer on the water softener clatters away to itself in the basement, and the softener itself howls for about two hours, twice a week.  Beside it is the chest freezer, beside that is the ‘beer fridge’, plus the big one in the kitchen, none on constantly, but regularly.  Even the water heater burbles away to itself when hot water is used.

In an attempt to conserve electricity, Ontario has banned incandescent light bulbs.  The new CFL, compact fluorescent light bulbs are cheaper on power, but each has a starter built into the base.  These emit a faint 60-cycle hum when turned on.  I sit beside a tri-light bulb when I do my crosswords.  The greater the light output, the more pronounced the hum.  Two or three of those in a room, and the cats have their paws over their ears.

The tower for my PC sits below my desk, down in cat-hair country, so we decided to add a second exhaust fan, just to be safe(r).  The son’s PC is not always on, and only has one fan.  The wife’s laptop has one exhaust fan, but she plays a lot of games.  No Grand Theft Auto – more Canasta and Monopoly – but it was overheating, so now its single fan sits above a cooling pad with two more fans running.

The wife has tinnitus – overactive nerves that make her ears ‘hear’ squeals and whines that aren’t there.  To cover up the fakes, so that she won’t go crazy, she often has the stereo on low, or a play list running on the laptop.

There’s the exhaust fan above the stove, when we’re cooking – the washroom exhaust fan – the washer and/or dryer – the dishwasher – the microwave – the stove-oven exhaust fan – the toaster-oven fan – the traffic noise from the four-lane Regional road, 100 feet from my back door – the four-year-old boy who lives in the other half of our semi-detached house, with his collection of bowling balls that he rolls down the stairs, and his seven-year-old sister who walks like a rhino.

I’m going mad – MAD I tell you!  (What?  Too late??)  It’s a wonder that the kids playing road hockey outside don’t tell us to keep it down.  I moved from a quiet small town to the big city (500,000) for jobs and amenities.  I shouldn’t complain, but I’m a Grumpy Old [retired] Dude, what else do I have to do?  If any of you want to comment about the levels of noise you have to put up with, YOU’LL HAVE TO SPEAK UP!  I CAN’T HEAR YOU!   😉