Who walked a crooked mile
And when I tell his tale
We get a crooked smile. 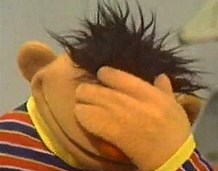 Two men decided a back-to-school event at an office supply store would be the perfect time to do some shoplifting. After all, store clerks would be busy helping an influx of shoppers. The sale happened to coincide with the annual ‘Shop with a Cop’ day, when about 60 police officers show up to help children pick out school supplies.

Adan Juarez Ramirez had it all figured out—he could be a cop without having to take the boring test. But he was arrested in Grapevine, Texas, after pulling over a driver in his pickup truck, outfitted with flashing lights. He even had an ID badge, which he’d made by blacking out a restaurant gift card and etching in the word ‘POLICE.’ However, he’d kept the restaurant’s logo, a jalapeño pepper surrounded by the words ‘Chipotle Mexican Grill.’

The Case of the Returned Merchandise

A Target store in Augusta, Georgia, agreed to take back a printer from a dissatisfied customer. Then the clerk noticed some work the customer forgot to remove from the machine: Counterfeit bills.

You Mean It’s Not Scout Night?

Two machete-wielding men barged into a Sydney, Australia, bar demanding money. They didn’t know the club was hosting a bikers’ meeting at the time. One of the robbers ended up in the hospital, the other hog-tied with electrical wire.

In Mesa, Arizona, a home break-in was foiled when the burglar jumped through the bedroom window—and got trapped in a clothes hamper. Cops took it from there. (That definitely wasn’t the kind of clean getaway he had planned.)

Joseph Goetz’s alleged attempt to rob a York, Pennsylvania, bank met with some snags. Cops say the first teller he tried to rob fainted and the next two had no more cash in their drawers. Fed up, Goetz stormed out, threatening to write an angry letter to the bank.

A German bank robber sent mocking emails to local police, ridiculing their efforts to arrest him. First he let them know they had his age, build, and accent wrong. Then he corrected their announcement that he’d escaped on foot; no, he had a getaway car! The cops got the last word in, though, when they arrested the guy a few hours later. They used his email to trace him.

The Case of the Clean Intruder

After a man kicked in the front door of a Texas home at 3:30 a.m., the resident fled and called police. When cops arrived, they were surprised to find that the intruder hadn’t stolen a thing. Police found the man in the bathroom, enjoying a warm bath.

Robby Rose lost his first-place medal and was charged with a felony after it was discovered that he’d cheated in a Texas fishing tournament by stuffing a one-pound weight down the throat of a bass he’d caught. Officials became suspicious when they placed Rose’s fish in a tank and it sank to the bottom.

According to the bus driver, it was a brutal, unprovoked attack. A woman got on his bus and assaulted him with a half-eaten banana. ‘I had banana all over me,’ he insisted. ‘On my tie, my shirt, and my eye.’ The woman explained that the driver had almost hit her car and that when she entered the bus to rationally discuss the matter, the banana slipped … right into his tie, his shirt, his eye … The court may not have believed that, but it did believe her when she argued that it was ‘unreasonable that a banana could cause this much damage.’ They slapped her with a fine of only about $100.

You are gonna regret that tattoo

Police in Pico Rivera, California, had an easy time pinning a four-year-old murder on Anthony Garcia. That’s because he pinned it on himself—with an elaborate tattoo on his chest, depicting the killing. Cops noticed the incriminating ink when taking Garcia’s mug shot for a petty crime. The tattoo revealed all the details of the night, from the Christmas lights and bent streetlamp near the liquor store where the body was found to the image of an angry helicopter—Garcia’s nickname was Chopper—machine-gunning the victim.

Lincoln on the money

James Rhyne of Memphis was charged with forgery after he handed a waitress a $100 bill. The waitress knew something was funny with the money: Instead of the portly visage of Ben Franklin, it was the star of the $5 bill, Abe Lincoln, who was staring back at her.