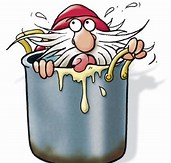 From my random knowledge post about ‘Boudin’, a rustic French sausage, I want to tell you about a real-life potlicker.

‘a poor person, often uncouth and uneducated’
Dialect. A worthless or disgusting person or animal.

A small but prestigious College in the United States had a professor retire.  The Dean and his staff set out to find a suitable replacement.  The final choice(s) came down to two men.  On paper, they looked exactly evenly matched, the same amount of education, the same amount of quality experience.  Both had sterling references.

“On paper” and “in person,” are not the same thing.  It was decided to invite each of them out for dinner with the small selection committee, to see how well they fit in on a personal basis.  Each was taken to a lovely, up-scale steakhouse.

The meeting with the first one went well…. until the main course was finished, and the applicant picked up, and licked his plate clean.  Glances were cast, and he was assured that, “We’ll be in touch.”  The choice seemed obvious, but, it was felt that the second contender should, at least, be looked at in the same social situation.

Again, all went well until the end of the meal.  When he was asked if he had any questions about things that they hadn’t covered, the only thing he wanted to know was, what the College’s policy was on professors dating students.

In the car, on the way back to the College, it seemed unanimous that, “I guess that it’s the plate-licker then.”  You can teach a rube some table manners, but it’s dangerous to have a sexual predator on campus, especially one dumb enough to advertise his intentions.  😯