I remember the first time that I ate out of a garbage can. 😯 It was in the late 1940s, and Kellogg’s was trying a new marketing scheme. 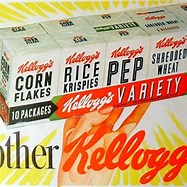 Their cereals came in small and large boxes, but they began offering them in tiny, serving-size boxes. The equivalent of a large box would get you 10 or 12 of these, all wrapped together. The fronts had an H-shaped perforation. You peeled back the two cardboard wings, and did the same with the waxed-paper liner inside. You poured milk right into the box, and ate the cereal right from it.

This was one of the first “labor-saving devices.” Working mothers didn’t have bowls to wash. The extra labor and packaging material made them more expensive, so they didn’t do well in my cheap, dirt-poor little town.

Kellogg’s produced them in every flavor that they made. They also made a ‘Variety Pack”, with some of each. The tiny, independent grocery carried them for a while. It sat beside a laneway to another street. There was a garbage pail right beside – not a dumpster – nobody could afford to throw that much away. Somehow, one of the sampler packs came apart. Unable to sell it, the grocer just gathered the pieces up, and dropped it into the garbage pail beside his building.

Finally dry from his immersion in the Niagara River, yours truly was busy skulking and gallivanting around town. I approached the store by the alley, from the next street. I stopped to look in the garbage pail, and couldn’t believe it. Someone was throwing perfectly good food away. There were little boxes of Kellogg’s Corn Flakes, Vim, Rice Krispies, All Bran, Shredded Wheat, Bran Flakes – several types that I’d like to try, but couldn’t afford to purchase a whole big (or small) box, in case I didn’t like them.

They were all “Good-For-You” cereals…. and all that Bran! You wouldn’t be just regular – more like steady. I don’t remember any Sugar Corn Pops, or Sugar Smacks, or Sugar Anything. Sugar hadn’t been invented yet – or perhaps it wasn’t off wartime rationing. That’s why old people like me are sour and bitter. They had nothing sugary to sweeten them up.

The pail was relatively new and clean. The bulk package cardboard was pristine. The small inner packs touched only it. I dug out most of the tiny boxes – as many as my little arms could carry, and quickly headed for home with them. I told my Mother that ‘someone was throwing them away,’ without mentioning the garbage can, and had a bowel-cleansing assortment of breakfasts for almost two weeks.

Even today, there are individuals and groups – and not just homeless people – who regularly comb supermarket dumpsters for food deemed unsalable – packaged meats, cheeses, bread products, even fruit and vegetables, past their ‘Best Before’ dates. They eat it themselves, or donate it to food banks, to be used today. It saves money, and reduces the amount going to landfill sites.

The son works a midnight shift. He leaves work at 7:30 AM, and reaches the nearby supermarket just as it opens at 8:00, to purchase a discount copy of the Toronto Sun newspaper. He has learned to look at the other discount racks. Stock that will be thrown out tomorrow, is on sale today, for 20%, 30% – 50% off. He often comes home with half-price ground beef, steaks, roasts, bread, and buns. What doesn’t become his 9:00 AM ‘midnight snacks’, or goes into his little apartment-sized freezer, often makes its way into the household larder.

Reduce Reuse Recycle! Waste not – Want not. Do you do anything like this, to aid your economy, and the Ecology?