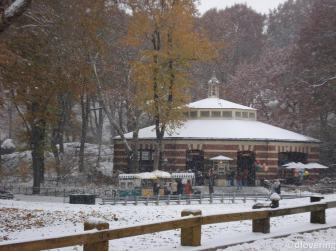 Today was the most exciting, important and defiant day in Jenn and Tony’s lives. They had been thrilled that the city had granted them exclusive use of this big gazebo in the park.

After taking care of City Hall paperwork, they had joined their friends here. The non-traditional caterers were set up outside, and inside, they had TUNES. The thing about Canadian weather was, if you didn’t like it, wait five minutes and it would change, but it was only Sept. 21, the equinox.

“Well Jenn, you did say you would also have liked a white wedding. You got one!”

Baking, actually.  It’s a good thing I have a few posts ahead in the drafts file, or I wouldn’t even have been able to put out the desperate few I did, the last week or so.  We’ve been making Christmas cookies.  We two fruitcakes also made two fruitcakes.  I can’t figure out how to Email the second one to KayJai, so I guess we’ll be forced to eat it ourselves.

In the last couple of weeks, the wife and I, with some help from both daughter and son, have made up 80 to 90 dozen cookies.  First we laid in supplies, a flat of 2 ½ dozen fresh eggs, ten pounds of butter, two 10 lb. bags of flour, plus nuts, flavoring, decorations, chocolate, and stuff even I don’t know about.

It all started because my wife is the youngest of nine children in a Bad Good Catholic family.   Well into her late twenties and early thirties, she was treated as if she couldn’t cook, despite her next oldest brother, a trained Chef, admitting that she cooked better than him.  For the summer family picnic, she was told to “Just bring chips and dip.”  For the Christmas celebration, it was, “We’ve got the main courses.  You just bring cookies.”  So she learned how to make homemade cookies.

My good Scottish mother taught her how to make real Scottish shortbreads.  The secret is working the dough by hand, so that the skin warmth causes the butter to meld with the flour and sugar, to produce a literal melt-in-your-mouth Ambrosia.  This year, instead of using white sugar, she produced a second batch with Canadian Maple Sugar.  If the Americans ever invade Canada, it will be to get those cookies.

The grandson is allergic to wheat flour, so she found cookies with no flour, not just for him, but he loves them.  Hard meringues are just lots of egg whites and sugar, whipped till they’re stiff.  Three different batches, all with different stuff mixed in, one got shredded dark chocolate and hazelnuts, one had slivered almonds and Skor bits, and the last received finely chopped glazed cherries and coconut.  Dollop on a sheet of parchment and bake low and slow, till firm.

Oat delights are melted chocolate, shortening, rolled oats and coconut, mixed together.  No need for baking.  Form into small globs on a cookie sheet.  When the chocolate solidifies, they’re ready to eat.

Yule logs, thumbprints and spritz cookies all have a shortbread-like base.  Yule logs are rolled to finger-like size and shape, and baked.  The next day they have the tops dipped by hand into chocolate and set aside to harden.  Thumbprints are rolled into ping-pong balls, dipped in egg-white, rolled in chopped walnuts and half a glazed cherry pressed into the tops, then baked.

Spritz cookies are dispensed by a cookie-press, so that they, but not me, are fresh-pressed.  Variously sized and shaped bottom dies give crosses, Christmas trees, and lobed discs.  These have colored sugar balls and other shapes pressed in by hand before baking.

While making cookies for the family gathering years ago, the wife threw out her back.  We had just received a flyer from a new chiropractor, working from the basement of his home, a half a mile away.  I called and he said to bring her over.  It’s 9:30 at night!  You mean, in the morning, right?  No!  No!  Bring her now.  We went over.  He cured the problem, we took along a card-box of cookies as a thank-you, and a tradition was born.

When the wife was forced to give up her family, because they were toxic, en masse, we needed somewhere to put all these cookies.  Each year the number of cookies given to the doctor and his family grew, as his family increased.  Sugar cookies were added to the mix, specifically for the kids, and the Christmas cake recipe was developed for the adults’ more refined tastes.

Sugar cookies, rolled out flat and baked, are bland and uninteresting.  As with so many things worth doing, the wife decided to improve on them.  We began icing them, not just with a sugar glaze, but with a colored, flavored glaze.  Bells are coated with a gold, maple flavor, stars, snowflakes and snowmen get white, almond.  I slather green, mint on holly wreaths.  Stockings get red, cherry, except for a white cuff.  I stripe candy-canes red and white.

The wife makes sure bears and reindeer look natural in brown, gravy?  No. Peanut butter? No!  Sugar beads, bells and bows, along with other shapes, and coarse, colored sugar, are all added to dress them up.  Their stockings all have their names in burnt-sugar coloring on the cuffs.  We cut out boy-shapes and girl-shapes.  The daughter, with the best eye, the steadiest hand, and the most artistic flair, turns these into representations of the kids.  Kids?  Hah!  They were when we started, 25 years ago.  The cookies have grown with them.

Two of the girls are married.  She made one girl-cookie into a young school-marm, with a book on the front of her pretty frock.  Another married daughter is also a teacher, but more of a free-spirit, so her cookie looked more like a hippie in a flow-y skirt.  The third was dressed in a ball-gown, with a string of pearls.  The son, the youngest, and studying to be a pharmacist, got his cookie with a pharmacist’s jacket, and his studious glasses.  One new husband is a painter.  His boy-cookie came with a paint spattered sweatshirt and blue jeans.  The other is a bit of a gamer, so his showed a controller on the tummy.

The kids have loved these personalized presents for years.  Even now, *grown-up*, they and their spouses still want the fun, and the recognition.  Pictures are taken and stories are told to friends and co-workers.  The family has built a Christmas tradition.  First they exchange and open presents, then they all sit down to pots of tea, and our cookies for a family brunch.  While making this mass can be a bit (lot?) of work, it’s also fun, and what we do to release tension.  The joy and appreciation make it all worthwhile….and there’s leftovers till February.

Oops, almost forgot.  We found that the chiropractor’s favorite cookies are Ginger snaps, so we include a canful, for him.  He claims he takes them downstairs to the office, and the rest of the family doesn’t even know about them.