YOU OUGHTA BE IN PICTURES 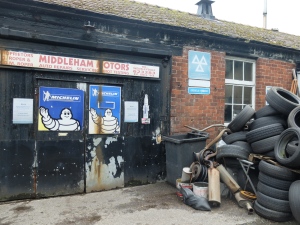 Richie had a real mania for anything related to films.  He’d even got an autograph from some kid who held a clapper stick.  He wasn’t hard to convince to come along on an artifact hunting expedition, but, the further we got from the city, the more reluctant he became.

“Why are we way out here?  There’s nothing connected to films in this run-down little village!”

“Sure there is.  They filmed some of the Transformers movies here.” I replied.  “See there.  That’s the changing room for Optimus Prime.  Maybe you could get a tailpipe, or a tire for your rec-room wall.”

Go to Rochelle’s Addicted to Purple site, and use her weekly photo as a prompt to write a complete 100 word story.