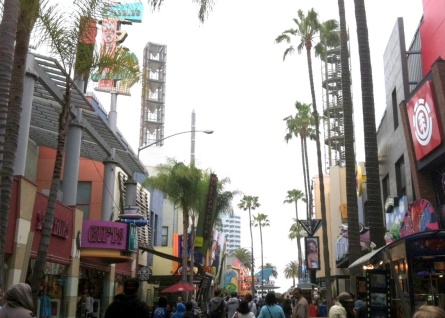 I had a WOW composed, Just In Case, but Rochelle has once again, kindly proffered a prefabricated excuse for the creatively challenged.

It All Comes Out In The End

Rob honey?!  Come have a look at this.  We saved hard enough for this Hollywood trip; you should come and enjoy it.  Just look at the people – and the palm trees – and the….  ROB!!?….  What was that….?

What was the name of that stuff we saw advertised back in Illinois, that’s supposed to prevent ‘travellers’ diarrhea’?  Duckitall??  Dukerol!!  I thought that was just if you went to, like, Thailand.  I didn’t know about a bad fish taco in Redlands.

You go ahead with that walking tour of the homes of the stars.  My tour’s going to be sitting.

I saw Dukerol advertised a couple of days before the original challenge, so I worked it into this Flash Fiction.  In the six years since, I have never heard it mentioned again.  😳

Oh, the things I learn, when I’m trying not to learn something else.  So, there I was, blithely gambolling through the dictionary, when I tripped over

a person who loves, likes or appreciates bears.

a person who is very fond of and is usually a collector of teddy bears.

Everything has a name, and usually, the name means something, if we only stop and think.  😛  Ow, ow, ow.

The ATLANTIC Ocean is so-called, because it is supposed to contain the lost continent of Atlantis.  Once Ferdinand Magellan fought his way through the rough seas, and around Cape Horn, it was on the one day that the rest of the ocean that he could see was calm and peaceful, so he called it the PACIFIC ocean.  I wonder what the residents of Hawaii are thinking about that title these days.

BTW – I have a clear memory of my Grade 6 teacher telling the story of Rocky Balboa’s grandfather, Vasco Núñez de Balboa, hacking his way across the Isthmus of Panama to reach the western ocean – and being the one who found a calm, serene body of water, and dubbing it Pacific.  She obviously mixed the two explorers up.  😳

The ARCTIC Ocean got its name from the presence of polar bears.  ARCTURUS (guardian bear) is the brightest star in the Great Bear (Big Dipper) constellation.

In trying to free my foot brain from arctophile, I stumbled into the word NUBILOUS.  At first I wondered if it was related to the word, nubile.  Regarding a woman, that simply means, “suitable for marriage.”  Crosswords often give clues like ‘beautiful, attractive, or good looking.’  She could be as ugly as a junk yard dog, but if she’s physically developed and single, she’s nubile.

NUBILOUS is actually a reference to the ancient land of Nubia, and it means, cloudy or foggy; obscure or vague; indefinite.  Nubia was a region in S. Egypt and the Sudan, N. of Khartoum, extending from the Nile to the Red Sea.  Despite being mostly desert, apparently there was a section of it which was cloudy or foggy, probably by the Red Sea shores.

Because of pronunciation and spelling drift, Nubia is also The Land of NOD mentioned in the Bible where Cain went to get a wife.  I’ll pronounce you man (or woman) and blog-post if you’ll stop back soon.  😀 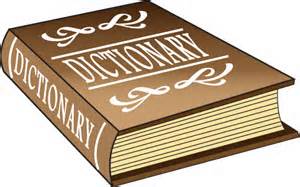 Let’s face it — English is a crazy
language. There is no egg in eggplant
nor ham in hamburger; neither apple nor
pine in pineapple. English muffins
weren’t invented in England or French
fries in France. Sweetmeats are candies
while sweetbreads, which aren’t sweet,
are meat.

We take English for granted. But if we
explore its paradoxes, we find that
quicksand can work slowly, boxing rings
are square and a guinea pig is neither
from Guinea nor is it a pig.

And why is it that writers write but
fingers don’t fing, grocers don’t groce
and hammers don’t ham? If the plural of
tooth is teeth, why isn’t the plural of
booth, beeth? One goose, 2 geese. So one
moose, 2 meese? One index, 2 indices?

Doesn’t it seem crazy that you can make
amends, but not one amend, that you comb
through annals of history but not a
single annal? If you have a bunch of
odds and ends and get rid of all but one
of them, what do you call it?

If teachers taught, why didn’t preachers
praught? If a vegetarian eats vegetables,
what does a humanitarian eat? If you
wrote a letter, perhaps you bote your
tongue?

Sometimes I think all the English
speakers should be committed to an
asylum for the verbally insane. In what
language do people recite at a play and
play at a recital? Ship by truck and
send cargo by ship? Have noses that run
and feet that smell? Park on driveways
and drive on parkways?

How can a slim chance and a fat chance
be the same, while a wise man and a wise
guy are opposites? How can overlook and
oversee be opposites, while quite a lot
and quite a few are alike? How can the
weather be hot as hell one day and cold
as hell another?

Have you noticed that we talk about
certain things only when they are absent?
Have you ever seen a horseful carriage or
a strapful gown? Met a sung hero or
experienced requited love? Have you ever
run into someone who was combobulated,
gruntled, ruly or peccable? And where
are all those people who ARE spring
chickens or who would ACTUALLY hurt a fly?

You have to marvel at the unique lunacy
of a language in which your house can
burn up as it burns down, in which you
fill in a form by filling it out and in
which an alarm goes off by going on.

English was invented by people, not
computers, and it reflects the
creativity of the human race (which, of
course, isn’t a race at all). That is
why, when the stars are out, they are
visible, but when the lights are out,
they are invisible. And why, when I wind
up my watch, I start it, but when I wind
up this essay, I end it. 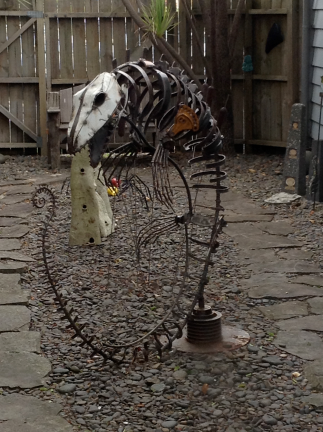 TEACH A MAN TO FISH

It had been a gorgeous vacation.  They had sunned, surfed and swam.  They had been driven to the observatory on top of a mountain, to see Hawaiian snow, and the stars beyond.

Now their hotel was throwing them a farewell luau.  Bob had heard that they buried an entire pig on a bed of coals beneath the sand.  The Lanakai did something different.  They substituted Mahi Mahi, a local game fish, wrapped in palm leaves and slow-baked.  The feast was exquisite.

It might be back to the grind in Titusville on Monday, but he would remember this all his life. 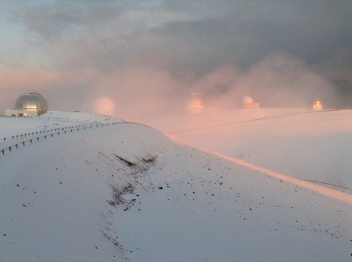 When Bob heard that he’d been awarded an internship at the Moana Kea Observatories in Hawaii, he thought he was going to Heaven.

When his boss picked him up for work the first night, he found out that Hawaii has six of the seven global climate zones.  There are no deserts, but it ranges from Tropical, to Arctic where he would be working.

With frigid fingers, he quickly called his Mom in Chicago to send his winter coat, but the views were well worth the trouble.  He could see Heaven spread out below him, and Heaven in the stars above.

And if I’d been born rich, instead of so darned handsome, I’d be living near lucky Doug MacIlroy in Hawaii, where he was fortunate enough to snap this awesome photo. 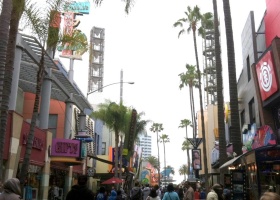 It All Comes Out In The End

Rob honey?!  Come have a look at this.  We saved hard enough for this Hollywood trip; you should come and enjoy it.  Just look at the people – and the palm trees – and the….  ROB!!?….  What was that?

What was the name of that stuff we saw advertised back in Illinois, that’s supposed to prevent ‘travellers’ diarrhea’?  Duckitall??  Dukerol!!  I thought that was just if you went to, like, Thailand.  I didn’t know about a bad fish taco in Redlands.

You go ahead with that walking tour of the homes of the stars.  My tour’s going to be sitting.